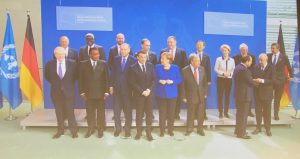 The Berlin Conference on Libya published a catch-all communique at the end of its deliberations today, stressing it was a process for the UN to follow up on and implement (Berlin Conference).

The Conclusions of the Berlin Conference on Libya that have just been released provide such a wide remit to please all participating parties allowing for broad and different interpretations and providing no real new solutions or mechanisms to break the impasse that has dogged the Libyan crisis since the 2015 Skhirat Libyan Political Agreement.

The conclusions create a new 5+5 Committee shared equally by the internationally recognized government in Tripoli and the pro Khalifa Hafter side. The conclusions say that Berlin is a ”process” and that UNSMIL is to follow up and implement its conclusions through an International Follow-up Committee (IFC) made up of representatives of all those that participated in the conference.

The conclusions will be referred to the UN Security Council to adopt and support.

The conclusions build upon the Paris, Palermo and Abu Dhabi processes and conclusions as well as the 2015 Skhirat Libyan Political Agreement and all relevant UN and UN Security Council resolutions. This includes UNSMIL’s Gassan Salame current ”Three-Point-Plan” for Libya.

The conclusions say that Berlin was aimed at unifying international support for a political solution for Libya and reiterated that there can be no military solution in Libya.

The document called for the fight against terrorism and illegal migration and the enforcement of the arms embargo – as well as sanctions against those that break the embargo. It called for a permanent ceasefire and a mechanism to monitor it.

It also called for the equal distribution of wealth to remove grievances , the monopoly of the state on the legitimate use of force and the Disarmament, Demobilisation and Reintegration of the Militias.

It also called for the respect of Libya’s sovereign institutions such as the Central Bank of Libya, the Libyan Investment Authority and the National Oil Corporation and for violators of international human rights laws to be held accountable.

Here is the full text:

RETURN TO THE POLITICAL PROCESS

Faltering international steps in Berlin towards peace in Libya