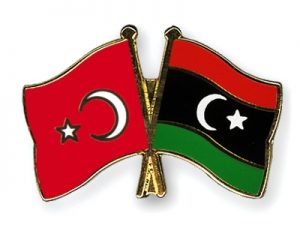 Turkey’s Foreign Ministry yesterday warned that Hafter’s elements could be considered legitimate targets if they target Turkish diplomatic missions and interests in Libya.

The statement comes after missiles, attributed widely both locally and internationally to Hafter’s forces, landed near both the Italian and Turkish embassies in Tripoli on the night of 7 May.

The Turkish Foreign Ministry statement referred to Hafter as the ‘‘warlord’’ and ‘‘putschist’’, and his forces as ‘‘illegitimate’’. It described his actions as ‘‘war crimes’’, ‘‘atrocities’’ and ‘‘massacres’’. It said countries supporting Hafter share responsibility for the ‘‘atrocity, chaos and instability’’ Libya has drifted into.

It concluded by saying that Turkey will continue to support the legitimate Libyan government (in Tripoli).

Putting the Turkish statement into context, it must be recalled that the internationally recognized Libyan government in Tripoli had made a request for military help from the Turkish government in February this year.

Following the military cooperation deal, President Recep Tayyip Erdogan said that Turkey would consider sending troops to Libya if the Serraj government made such a demand. The Turkish Parliament approved a bill on 2 January.

The troops would aid the Tripoli government fighting against the forces led by Khalifa Hafter. In theory, the Turkish parliamentary approval allows for the deployment of non-combatant troops to act as advisers and trainers.

At the time, the Whitehouse had reported that U.S. President Trump warned Erdogan in a phone call against ‘‘foreign interference’’ in Libya.

It will be recalled that Khalifa Hafter’s forces launched an attack on Tripoli on 4 April 2019 on the pretext of freeing it from ‘‘terrorists, Islamists and militias’’.

But it must also be recalled that Hafter receives or had received financial, political and military support from several countries, including, UAE, Egypt, Jordan, Syria and France.

Another point to bear in mind is that Hafter was officially appointed as commander of the Libyan National Army (LNA) by the still (and only) internationally recognized Libyan parliament based in eastern Libya, the House of Representatives (HoR).

On 4 January this year, the HoR reacted to Turkish parliamentary approval of the Turkish-Libyan MoU by cutting relations with Turkey, annulled the Libya -Turkish security and military agreement, withdrawing recognition of the (2015 Skhirat) Libyan Political Agreement and its resultant and internationally recognized Tripoli-based government (GNA) led by Faiez Serraj. It further called on the international community to likewise withdraw their recognition of the GNA.

It further referred Faiez Serraj, his Foreign Minister, Mohamed Siala, his Interior Minister, Fathi Bashagha and ‘‘all those who contributed to bringing colonialism to our country’’ to justice on charges of high treason.

It voted to authorize Khalifa Hafter’s LNA to ‘‘disrupt airports, ports and land ports under the control of (Tripoli) militias’’

The HoR session did involve about 50 members, which is thought not to constitute a quorum.

On a related note, in its recent briefing, the US State Department said that both Hafter and the Tripoli government are using Syria/Turkish mercenaries. The Turkish mercenaries are Syrians of Turkish ethnicity.

Here is the statement if full Turkish Foreign Ministry statement:

The illegitimate militia forces led by warlord Haftar in Libya have recently increased their indiscriminate attacks against civilians and civilian infrastructure, particularly in Tripoli. Just on 9 May 2020, the elements affiliated with Haftar launched more than 100 missiles along with heavy artillery fire on civilian neighbourhoods in the city centre of Tripoli.

These attacks targeting diplomatic missions including our Embassy in Tripoli, Mitiga International Airport, civilian aircrafts prepared for departure and other civilian infrastructure, which resulted in civilian casualties and injuries, constitute war crimes. In this context, we reemphasize that we will consider Haftar’s elements as legitimate targets in case they target our diplomatic missions and interests in Libya.

It is unacceptable for the United Nations to still remain inactive in the face of this atrocity. The international community bears a collective responsibility to stop putschist Haftar, who massacres his own people irrespective of child, woman or the elderly in this holy month of Ramadan and pandemic period.

It should not be forgotten that those countries providing military, financial and political support to Haftar share responsibility for the atrocity suffered by the Libyan people, and the chaos and instability the country is drifted into.

Turkey will continue to support the legitimate government and institutions of Libya for the protection of the friendly and brotherly Libyan people.

US does not support Hafter attack on Tripoli. Seeks ceasefire and political dialogue. Syrian mercenaries fighting for both sides: US State Department