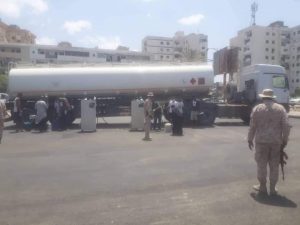 It said it will roll-out the new service in more localities over the days and weeks. It claimed that there is no shortage of diesel supply.

The move is aimed at meeting increased demand and circumventing the corrupt, black-market racketeering petrol stations.

But the move is also the result of power cuts that have meant petrol stations do not have electricity to operate their fuel pumps. This, even though the NOC had promised years ago to supply power generators to all petrol stations to mitigate against Libya’s crippling power cuts.

The action by Brega is also symbolic of today’s Libya where anyone with money can order by phone unlimited amounts of diesel to be delivered directly to their home or commercial premises – at the black-market price of between LD 1.50-2.50 – while it is not available at the official price of LD 0.35 at petrol stations. This reflects the futility of fuel subsidies.

Another symbolism of post-2011 Libya was the long queues of citizens with their plastic jerry cans and the need for the diesel distribution tankers to be guarded by armed soldiers. The armed guards are to help prevent racketeerers from buying up all the diesel on offer for profiteering.

Libyan social media has wasted no time in mocking the situation where citizens must wait in long queues, in the mid-summer sun, for fuel at official prices, in a supposedly oil-exporting country. They likened this to what they referred to as a ”poor third world country” and not an OPEC oil-exporting country.

It must be noted that a lot of the black-market fuel racketeering is conducted by state-paid and recognized militias. Libyan social media used a well known Libyan proverb to describe this: ”Its protector is its thief”, that is, those who are charged and meant to protect citizens and the state – are the very ones engaged in exploiting it.

Most of Libya’s 129,000 registered jobseekers hold a university degree: Ministry of Labour