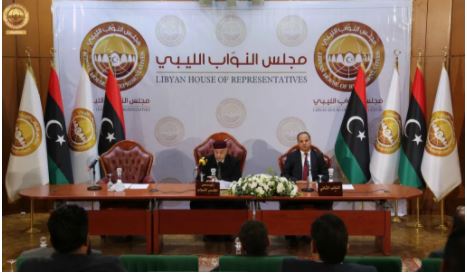 HoR head Ageela Saleh is looking weak as only 20-odd members turned up in Benghazi for his official session. Over 100 are currently meeting in Ghadames for an unofficial meeting (Photo: HoR Benghazi).

The House of Representatives (HoR), Libya’s internationally recognized parliament, held what it referred to as an ‘‘official’’ session at its constitutional headquarters in Benghazi, headed by Ageela Saleh and Second Deputy Hmid Houmah. Official photos show no more than 20 members in attendance.

According to HoR official spokesperson Abdalla Belheeg, the session opened with a speech by Saleh, in which he addressed the overall situation in the country and in the HoR since its inception.

He reported that the session discussed a number of issues and matters, whether with regard to the HoR’s agenda during the coming period or the current developments of events in the country in all fields, where the political situation and the course of the (LPDF) dialogue sponsored by the United Nations were discussed.

Belheeg, said that the parliament heard a briefing from the Minister of Interior of the eastern Libyan Government, Ibrahim Bushnaf, about the security situation in the city of Benghazi and the security situation in general, as the Minister of Interior confirmed that the city of Benghazi is safe and ready to host the sessions of Parliament.

Belheeg clarified that after the deliberations in the session, it was agreed to form a committee to discuss and amend the internal regulations of the House of Representatives (Law No. 4 of 2014) that organizes the work of the HoR. The committee is to be headed by the Chairman of the Legislative Committee, Ramadan Shambas.

The spokesman for the HoR stated that it was agreed during the session to prepare the HoR for an alternative plan in the event of the failure of the (LPDF) political dialogue sponsored by the United Nations, in addition to an agreement to form a committee to communicate with the Audit Bureau regarding problems and disruptions in the procedures previously faced by the eastern Libyan government.

Location of HoR sessions is key to power

Saleh wants to remain relevant and in control and the new process is increasingly marginalizing him. Holding the unified HoR session in Sirte or Benghazi keeps him and the reform agenda under his control.

It is for this reason that on 30 November the HoR under Saleh made a great effort to gain control of the official buildings that belong to the Libyan parliament since the Qaddafi era in Sirte. This would enable Saleh to host a reunified HoR session in Sirte where he seems to feel more comfortable and in control with Khalifa Hafter-aligned forces nearby.

The 2015 Skhirat Libyan Political Agreement (LPA) recognizes the HoR headed by Saleh – but with over 100 HoR members gathered in Ghadames, Saleh has become a shepherd without a flock.

Change invariably means a reordering of affairs and often leads to new winners and new losers. Saleh is being side-lined and may come out as the biggest loser out of any new political reforms. He is vying for that position with Khalifa Hafter.

Hafter may too become a big loser if he loses the loyalty and following of most of his Libyan National Army (LNA) forces. But at least Hafter has crude force to fall back on. If things go bad for Hafter and if he is inclined, and in a final act of desperation, he can be a better spoiler than Saleh by using force to retake the eastern or southern oilfields.

Saleh now simply relies on a rump of HoR members supporting him. He is increasingly becoming a vacant figurehead, out of touch, out of date and out of power and influence.

The international community in numerous statements have warned against political spoilers of the Berlin outcomes / LPDF process. With the majority of HoR members having been in Tangiers and now in discussion in Ghadames, it could be argued that Saleh has lost his right to lead the HoR.

Equally, Saleh calling last Thursday (3 December) for the holding of an ‘‘official’’ HoR session on Monday in Benghazi when he knew very well that over a hundred HoR members from the Tangiers consultations were gathered for informal consultations in Ghadames could be seen as an attempt to spoil the Ghadames meeting. It was an embarrassing gamble. In the end, the Benghazi meeting defined Saleh’s exact – or lack of – support in the HoR to a loyal rump of 20. 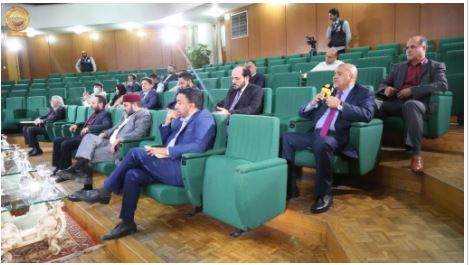 HoR head Ageela Salah is looking weak and isolated and the 20 or so HoR members who turned up for his official session publicly defined his weakness. This contrasted starkly for him with the 100-plus members meeting in Ghadames (Photo: HoR Benghazi).

The international community will be torn between, on the one hand, sticking to Saleh as prescribed by the LPA, which recognizes only one HoR, which is currently headed by Saleh, and on the other hand, recognizing the right and moral majority of the 100-plus HoR members in Ghadames to lead the reunified HoR.

Resisting the will of the Libyan people

With this, it can be said that the will of the Libyan people is clearly for reconciliation, peace and progressive change. Saleh is looking increasingly vulnerable, out of touch and isolated. He cannot postpone a quorate session of the HoR indefinitely. Sooner or later the reunified and re-energized HoR will meet and Saleh’s removal is a matter of when not if. There is a mood for and a wave of change and Saleh is not onboard.