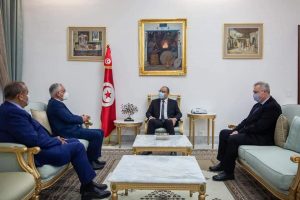 The head of Libya’s General Union of Chambers of Commerce and Industry, Mohamed Raeid, met Tunisia’s Prime Minister, the Central Bank Governor, a number of Tunisian Ministers as well as his Chamber of Commerce counterpart during a working visit to Tunisia on Wednesday (13 January).

Raeid is also a member of Libya’s parliament, the House of Representatives, for the city of Misrata.

The visit began with a meeting with Samir Majoul, President of the Tunisian Union of Industry, Trade and Handicrafts.

This was followed by a meeting with Marouane Abassi, Governor of the Central Bank of Tunisia, to discuss matters related to facilitating the movement of funds between banks in the two countries.

Raeid also met with the Ambassador of Tunisia to Libya, Al-Asaad Ajili, who expressed his happiness to start his work in Tripoli as of next week.

He then met Ali Al-Kali, Minister of Economy, Finance and Investment Support. During this meeting, the two parties discussed all issues related to customs, the movement of goods, and the promotion of trade exchange and investment between the two countries.

Raeid also met with Hesham Mechichi, Tunisia’s Prime Minister, to discuss means of cooperation between the two countries to unify efforts to support stability and encourage economic movement in all fields.

Finally, he met with Mohamed Boussaid, Minister of Trade and Export Development, in order to discuss activating trade agreements to increase trade exchange.

Libya-Tunisia border will not be closed under any circumstances: Tunisian PM Mechichi | (libyaherald.com)