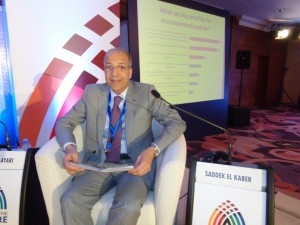 Libya’s CBL Governor Saddek El-Kaber is on his way out (Photo: Sami Zaptia).

Current Central Bank of Libya (CBL) Governor Saddek El-Kaber has not been nominated to continue on in his role as Governor of the CBL.

The House of Representatives (HoR) committee set up to propose names to head Libya’s sovereign authorities has drawn up a lengthy list of names for 10 positions and presented them to HoR president Ageela Saleh on 25 April.

The names were then sent by the HoR to the High State Council (HSC) on 26 April. For its part, the HSC met in Tripoli on 25 April and set up its own committee to assess the names.

It will be recalled that under Article 15 of the 2015 Skhirat Libyan Political Agreement (LPA), the HoR has to consult with the HSCS and reach a consensus on the sovereign positions.

In the case of the position of the Governor of the Central Bank, neither the current Governor, Saddek El-kaber, nor any of the current members of the board have been nominated for the post.

It will be recalled that the HoR has been trying to remove El-Kaber since 2014. He had been appointed by the in September 2012 by the parliament at the time, the General National Congress (GNC).

The current parliament first attempted to dismiss him on 14 September 2014 after he had failed to turn up to parliament in Tobruk for questioning.

On 9 April 2015, the CBL Board dismissed him again. The decision to sack El-kaber was signed by Ali Salem Hibri, the Governor of the CBL located in the eastern city of Al-Beida, and representing at the time the only internationally recognized government and parliament, the House of Representatives (HoR).