Libya needs to spend US$ 134 bn on reconstruction over 10 years: Minister 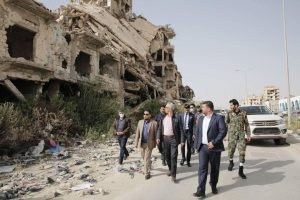 Reconstruction funds are to be created for war damaged areas including Benghazi which was visited by a government delegation last month (Photo: GNU).

The Minister of State for Economic Affairs, Salama al-Ghwail, revealed in an exclusive statement to Libyan 218 TV that Libya needs to spend 600 billion dinars (US$ 134 bn) on reconstruction fover the next ten years.

Meanwhile, Al-Ghwail pointed out that the estimated overall cost of the wars on the Libyan economy amounted to US$ 600 billion.

The Minister of State suggested that the private sector will participate in the reconstruction with 60 percent while the public sector will have 40 percent of projects.

Italian prime minister Draghi: Italy to contribute to the reconstruction of Libya | (libyaherald.com)