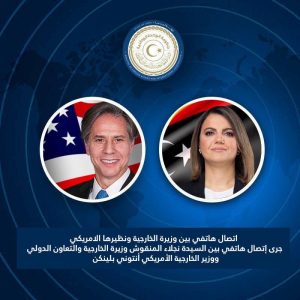 Foreign Minister Mangoush and Secretary of State Blinken talk by phone on Berlin 2 and the 24 December 2021 elections (Photo: Foreign Ministry).

During yesterday’s call, the two discussed the ongoing preparations for the 23 June Berlin 2 Conference on Libya, where the US Secretary of State stressed his country’s support for Libya’s stability, and affirmed his keenness to work with international partners to support the national elections on 24 December.

For her part, the Foreign Minister affirmed the keenness of the Executive Authority, the Presidential Council and the Government of National Unity, to implement the preliminary stage map, and stressed the importance of the United States’ support for the Libyan vision in Berlin.

Libya will be active and will present its ‘‘Stability Initiative’’ vision at Berlin 2 on 23 June: Foreign Minister Mangoush | (libyaherald.com)