Libya will be active and will present its ‘‘Stability Initiative’’ vision at Berlin 2 on 23 June: Foreign Minister Mangoush 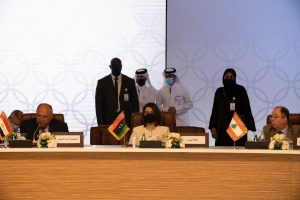 Speaking yesterday at the Extraordinary Consultative Foreign Ministerial Meeting of the League of Arab States in the Qatari capital, Doha, Libya’s Foreign Minister Najla Mangoush said Libya will be active and present its Stability Initiative at the 23 June Second Berlin Conference on Libya.

The premises of the Libya Stability Initiative will be based on the UN- brokered Libyan Political Dialogue Forum’s (LPDF) Road Map.

She thanked all countries for their support of the Presidential Council and the Government of National Unity, looking forward to the recent decisions that have removed the differences that appeared on the surface between the (Arab League) members regarding the Libyan file.

The Minister explained that Libya today is living a new reality through a unified executive authority that assumes its responsibilities on all Libyan territories in promoting peace, resolving differences through dialogue, and preparing for the upcoming elections.

Mangoush noted that Libya’s settlement path faces major challenges, but that Libya is determined to move with full force to implement the Road Map and bring Libya to safety. She added that the priorities of the Libyan Government of National Unity stemming from the Road Map are:

The Foreign Minister addressed the Libyan vision for addressing the Libyan file represented by the Libya Stability Initiative, which is based on:

On the other hand, Mangoush stressed the need to issue the necessary legislation to implement the Road Map, and to put in place a clear mechanism to put pressure on those obstructing the Road Map and international resolutions.

On national reconciliation, she said this was launched by the Presidential Council’s decision to establish the High Commission for National Reconciliation and community dialogues between all segments of society to develop scenarios that ensure the success of the Commission’s work.

Faltering international steps in Berlin towards peace in Libya | (libyaherald.com)

Serraj and Hafter invited by Germany to 19 January Berlin conference on Libya | (libyaherald.com)