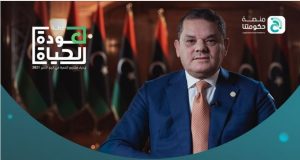 During his lengthy address to the nation on Friday, Libyan Prime Minister Abd Alhamid Aldabaiba announced the launch of the ‘‘Reviving Life’’ development plan.

‘‘We have developed a solid plan to move the wheel of development and start reviving stalled projects in Libya.

We announce the launch of the development programme for the last quarter of 2021 under the name ‘‘Reviving Life’’ after securing sources of income despite the lack of approval of the 2021 budget.

In his address lasting just under an hour, Aldabaiba said that nearly 60 percent of his proposed 2021 budget was made up of state-sector salaries. This s not possible, he bemoaned. The development section of the budget should increase, and the salaries sector should be decreased, he urged.

HoR objected to size of development section in budget

Oil should be a priority

At the top of the budget’s development section should be the oil sector as it is the sector that feeds Libya and Libyans, he added. Prime Minister Aldabaiba warned, however, that the era of oil is likely to only last another 10 to 15 years with renewables coming in. He, therefore, urged that Libya should maximize its oil leverage in the short term. To this end, he pointed out that he had allocated the oil sector about 25 percent of the development sector of the budget. We need to support the oil sector, he urged.

Aldabaiba said 36 percent of the proposed budget will go to electricity and energies, and that despite this he did not forget to support other development sectors through the various implementation agencies (such as the Housing and Infrastructure Board (HIB), the Organization for the Development of Administrative Centres (ODAC) and the Roads and Bridges Authority (RBA).

Development will be financed through one twelfth formula – not the budget

Aldabaiba said his reactivation plan for the development sectors has been ready for four months but that it was delayed by parliament’s failure to approve the budget. He said he invited the various project implementation agencies to put forward a development plan.

However, he explained that he had met with the head of the Audit Bureau and the Central Bank of Libya, implying that he had their approval, and that he we will use the one-twelfth spending formula to finance the development plan.

The Prime Minister noted that previous budgets had little money for development because sadly they were too busy financing wars and treating the war injured etc.

He said the money is now ready to finance these development projects and that the projects are spread across all Libya.

‘‘We have an excellent programme now ready for implementation’’, he added with a plan to drill 307 water wells across the country. All desalination plants will be serviced, with other projects in infrastructure, electricity and to activate the economy. Separate announcements were to be made on Sunday on the projects in Benghazi, and the Sebha projects will be announced on Wednesday.

The one-twelfth spending formula allows any sitting government to continue to spend one twelfth of the previous budget per month – to keep the country going – while it awaits the parliament of the day to approve its budget.

There is debate whether the one-twelfth formula is only supposed to be used in a caretaker capacity, disbursing salaries and day-to-day expenses – rather than for development projects.

We will keep to our pledges on electricity

Aldabaiba denied that his government does not keep its pledges. Our pledges on electricity will be kept, he insisted.

He blamed Libya’s electricity problem on four reasons: Ten years of lack of investment in the sector; Mismanagement in the sector, which he said he has started solving; and parliament’s delay in not adopting budget which delayed the electricity sector progress by four months.

Prime Minister Aldabaiba insisted that security in Libya is better. He said security infringements are less than many other capitals – thanks to the efforts of the security forces.

There have been accusations that whilst paying lip service to the planned 24 December elections, Abd Alhamid Aldabaiba and his government are secretly working to scupper them – like many of Libya’s status quo stakeholders. These could include most of the militias, Khalifa Hafter and his army, the High State Council and the HoR.

‘‘Elections will be held on 24 December’’, he insisted. The Prime Minister said he supported the elections and that he was not not afraid from them. ‘‘We are ready for them’’, he repeated. He accused those who doubt his government’s intention to implement the elections are those who don’t want elections.

However, he conceded that the holding of Libya’s elections is a purely legislative problem not an executive problem. He said the elections would not be against the interest of the Libyan people.

He accused those of being failures and the doubters of being the ones who fear the holding of the elections. The ‘‘failures’’ have no place in the future map of libya. He pointed a metaphorical finger at those who are trying to stop the elections and development using thin excuses. We are for the stability of Libya and unified security forces. We will not stand in way of development, he added.

We will support youth

On the criticism from parliament for his youth programme, he insisted he will support youth through the special fund he created for them – despite the doubters. Parliament had criticised the youth fund because it was not specified in the budget.

No more wars – message to Hafter?

Aldabaiba insisted that while he supported youth joining the legitimate army and police force, he will not take them into useless wars. We will not be stopped and will not be taken into failed wars, he insisted.

Without ever mentioning Khalifa Hafter, Aldabaiba condemned wars on cities and said he will not let ‘‘gangs rule’’ Libya. He accused those who ‘‘carry guns’’ of being uncivilized (Shlafti). He said Libya wants an army and police force, and those who want power by force are also shlafti.

Ahead of the questioning session, Aldabaiba says parliament has been a failure | (libyaherald.com)

Government unable to attend HoR session for questioning due to prior engagement abroad – requests questions in writing | (libyaherald.com)

28 HoR eastern members call for a vote of no confidence in Libyan government | (libyaherald.com)

Libya’s parliament and government are falling out: Analysis | (libyaherald.com)

HoR: No sessions to debate 2021 budget this week, government summoned for questioning on 30 August | (libyaherald.com)