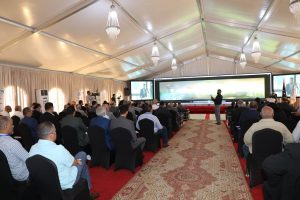 The Privatization and Investment Board (Eastern Region Branch) organized under the auspices of the Ministry of Economy and Trade a forum and celebration for the launch of investment projects under the slogan “Investment Knocks on the Doors of Municipalities” on Saturday in Benghazi. It comes as part of the government’s Reviving Life development programme.

The forum witnessed a presentation on the PIB’s country-wide projects available for investment and promising opportunities in municipalities as well as the announcement of the Investment Guide Platform.

The Investment Guide Platform includes the country’s Investment Map and the definition of the targeted investment projects in all cities and their data and information. The implementation of 16 investment and service projects which included the private sector, was also announced.

The attendees also watched visual presentations of investment projects implemented by local companies and other targeted projects during the next stage, as well as reviewing a number of experiences of entrepreneurs from the national competencies in the investment sector, presenting and discussing the problems and obstacles facing the sector and ways to motivate local and foreign investors in implementing investment projects.

PIB chairman, Jamal Al-Nuwaisari, stressed that the event comes within the government’s plan to ‘‘Revive Life’’ and aims to enhance communication between the PIB, municipalities, and the local and foreign private sector in the field of investment. and

This includes work to develop a unified mechanism in activating the sector and its role in the development of the national economy, developing local industries, raising the level of non-oil exports, and developing and exploiting natural resources in achieving spatial development, improving the level of services, and creating large job opportunities far from government employment.

The forum was attended by the Undersecretary of the Ministry of Economy for Free Zones Affairs, the Undersecretary of the Ministry of Housing and Construction for Technical Affairs, the Chairman and members of the Board of Directors of the PIB, the Egyptian Consul, the Italian Consul in Benghazi, the General Director of the PIB, the directors of the Authority’s branches in the eastern and southern regions, a number of municipal mayors and the Chamber of Commerce, Industry and Agriculture Benghazi, the Libyan Business Council in the Eastern Province, representatives of a number of local and foreign companies, and a group of academics, experts and interested parties.

There was a call for strengthening communication between the PIB and the municipalities to spread the culture of investment at the level of citizens and investors, in addition to forming an economic advisory team to assess investment obstacles and their impact on attracting national and foreign investments.

A report will be prepared to be referred to the Minister of Economy and Trade to be presented to the Council of Ministers.

The forum also recommended the necessity of obligating investing companies to be disciplined in the work contracts they conclude with employees by registering them in the Ministry of Labour and ensuring their rights related to insurance, as well as selecting several projects distributed to municipalities and assigning accredited consulting companies to submit feasibility studies to them.