There are foreign designs on Libya, eastern-based Ministers welcomed back with increased competencies: Aldabaiba 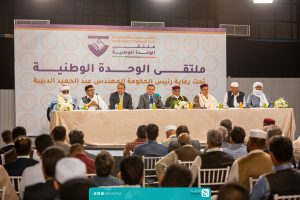 Aldabaiba said there are foreign designs on Libya (Photo: GNU).

There are foreign designs on Libya

Speaking at a reconciliation gathering of eastern notables and tribal leaders gathered in Tripoli Monday, Prime Minister Abd Alhamid Aldabaiba said there are foreign designs on Libya and that Libya is targeted.

They want to divide Libya. This became clearer to him once he was in office. They try to use parties and individuals to achieve this. He did not specify who ‘‘they’’ are.

Eastern ministers are welcome back

With regards to the speech by his Deputy Prime Minister Hussien Gatrani which is threatening to collapse the Aldabaiba government and the Libyan Political Dialogue Forum’s (LPDF) Roadmap, Aldabaiba called on all his eastern-based ministers and deputy ministers to come back to the fold with increased competencies.

Aldabaiba said they were forced to make the divisor statement and if there are any problems between his government and its eastern representatives, they were solvable. He said he did not want escalation but that ‘‘they’’ wanted to cause problems between the eastern and non-eastern parts of the government.

Again, Aldabaiba did not specify who ‘‘they’’ are, but it is assumed he meant the more extreme eastern-based House of Representatives members and Khalifa Hafter.

Libya was in a bad condition

Responding to demand after demand from different speakers from different cities for money for roads, hospitals, stalled wages, etc, Aldabaiba said when he came to office Libya was in dire straits. He said found Libya unconscious and had to give it water and oxygen to come to its aid.

He said he inherited LD 100 billion of debts. It is for this reason that he made these spending decisions. They were not made for political gain, he insisted, responding to the House of Representatives’ criticism.

He said he was spending no more than last year’s budget through the prescribed one-twelfth formula, and that between LD 7-8 billion were allocated for the ‘‘Reviving Life’’ programme of projects across all towns, cities and regions of Libya.

In response to Gatrani’s eastern Libya statement, UNSMIL calls on GNU to address grievances and all parties to engage in constructive dialogue within LPDF’s Roadmap | (libyaherald.com)

Libya on brink of another west-east split and unravelling of LPDF’s Road Map? | (libyaherald.com)