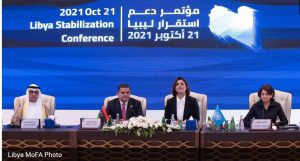 She called for elections to be held on time, on 24 December 2021, as called for by the Roadmap and UN Security Council Resolutions 2570 and 2571.

Here is her speech in full:

‘‘Thank you, Foreign Minister Mangoush, for the initiative of convening this international conference.  That it takes place in Libya’s capital is a testament to the progress that Libya has achieved. It is my pleasure to represent the Secretary-General at this meeting,

The UN has actively worked towards facilitating the Libyan-led and Libyan-owned political, security, and economic dialogues, with the support of the international community in the context of the Berlin process.

These dialogues must continue in order to sustain the momentum and ensure the full implementation of the Political Roadmap adopted by the Libyan Political Dialogue Forum (LPDF).  We urge all Libyan parties to exert every effort to hold parliamentary and presidential elections on 24 December 2021, as called for by the Roadmap and UN Security Council Resolutions 2570 and 2571.

On the political front, dialogue is needed to promote unity and support for the electoral process among all political actors. There is a need for compromise on a way forward. We commend the Presidential Council for its efforts to promote such dialogue. We call on all Libyan parties and institutions to refrain from any action that could undermine the electoral process or acceptance of its results.

The holding of timely, free, and fair elections is critical to break the cycle of perennial political transitions, to return to political legitimacy, and to put an end to foreign interference. The Libyan people want elections, and they want them now.

I urge all Member States and regional organizations to consider sending observation teams, in coordination with relevant Libyan authorities and institutions, to help ensure the credibility of the electoral process and acceptability of the results.

I also urge Libya’s leaders and institutions to ensure meaningful participation of women in the process and to ensure that women occupy at least 30 per cent of the seats in the new legislature.

The United Nations will continue providing technical assistance for the holding of elections in accordance with its mandate.

For a long time, Libya was governed by parallel institutions in the West and the East. Thanks to the work of the Libyan Political Dialogue Forum, the reunification of the country’s institutions was started.

We must not allow the approach of elections to reignite divisions.

The UN will continue supporting all efforts aimed at consolidating the progress achieved to date, including a unified government and a reunified and functioning House of Representatives.

Together with the African Union, we are also committed to supporting the Libyan authorities, including the High National Reconciliation Commission, in advancing rights-based reconciliation.

I commend the 5+5 Joint Military Commission for their unity of purpose on the security track, the JMC serves as an example for other national actors and institutions. Their Action Plan for the gradual, balanced, sequenced and synchronized withdrawal of all mercenaries, foreign fighters, and foreign forces is but the latest achievement of the 5+5.

The United Nations is ready to assist in consolidating international consensus to support the JMC in the implementation of the withdrawal plan.

Close coordination with Libya’s neighbours will be paramount to ensure that the plan is successful and that the withdrawal does not negatively impact the security situation in the region and the Sahel.

Disarmament, demobilisation and reintegration (DDR) programmes and Security Sector Reform (SSR) will be needed to accompany this process. These efforts must be supported by the international community.

I am pleased to report that, in line with the request of the Libyan authorities and the mandate from the Security Council, the first group of UN monitors to support the Libyan-led ceasefire monitoring mechanism are arriving today. They will work in concert with the Libyan monitors assigned by the JMC.

Finally, the UN is extremely concerned with the dire situation of thousands of migrants and asylum seekers in Tripoli who remain in arbitrary detention or are living on the streets as a result of forced evictions and destruction of their homes by security forces in early October.’’

On the eve of the Libya Stabilisation Initiative Tripoli conference tomorrow, delegations have started to arrive in the capital | (libyaherald.com)