BM edges forwards in Sirte and US warships change guard 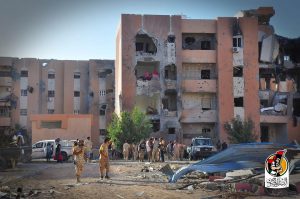 BM forces in a captured part of the 600 apartment complex (Photo: BM)

Bunyan Marsous forces suffered no fatalities nor serious casualties as they pushed forward yesterday through the high rise apartment blocks of the 600 complex in Sirte.

However the BM operations room claimed that terrorists had suffered losses but gave no details.

In the course of the day three US air strikes went in against IS positions. The Americans, who have so far launched approaching 350 attacks on the town, are withdrawing their fixed-wing AV-8B Harrier jump jets in favour of a helicopter force of Bell SuperCobras and Bell Venoms (Super Hueys).

The switch comes with the replacement of the amphibious assault ship USS Wasp with the amphibious transport dock, USS San Antonio which happened yesterday according to  the US Africa Command  AFRICOM.

Concerns continue to grow over attacks behind BM lines on the road between Sirte and Misrata. In the fifth such attack on passing vehicles since August, a Palestinian teacher was killed and his wife and family injured by a land mine or an IED as they drove to Sirte.

Such has been the concern of BM commanders that military traffic movements have been restricted to daylight hours though some convoys have been seen travelling at night. There has also been an increase in checkpoints along the route.  On 2 September a lone vehicle was blown up by an IED and two BM fighters killed. It was thought that the device was triggered remotely from nearby terrorist position.

This story has been updated to include the killing of the Palestinian.