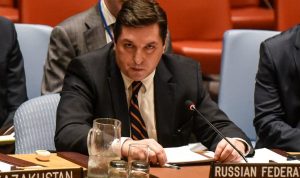 A mainly military Misratan delegation has been having talks in Moscow with top Russian defence and foreign ministry officials as well as members of the Russian parliament, the Duma, as the Kremlin continues its own efforts to broker peace in Libya.

It is as politically diverse a delegation as could be imagined. While Ben Rajeb is seen as an Islamist deeply opposed to the former regime and is currently trying to bring down Misrata’s democratically-elected municipal council, Dubaiba was closely involved with the Qaddafi regime, at on time running the Libyan Investment and Development Company. His cousin, Ali Dubaiba, was even closer to the regime, being a close confident of Qaddafi and head of ODAC (Organisation for Development of Administrative Centres). For his part, Ghasri is regarded as a supporter of the Presidency Council, which Ben Rajeb abhors.

Although there has been no confirmation from either side, sources in Misrata say that the delegation first met yesterday with leading officials from the Russian defence ministry before having talks with deputy foreign minister Mikhail Bogdanov.

The delegation, which flew to the Russian capital on a private jet, is expected to head south to the Chechen capital of Grozny tomorrow, Thursday, to meet Chechnya’s President Ramzan Kadyrov. He is said to have invited them to Russia in the first place.

According to a statement by Russia’s foreign ministry, Bogdanov told the Misratan delegation that Moscow wanted to work together with all of Libya’s parties to find “mutually acceptable solutions to restore the country’s unity”.

This had to come via inclusive “intra-Libyan dialogue with the main political forces, tribes and regions towards creating national bodies of authority, including an army and police to maintain security, law and order and effectively fight terrorism,” the statement insisted.

UN-led efforts promote reconciliation were also one of the main items of the discussions.

Although Russia has been seen as one of Hafter’s main allies and international supporters, Bogdanov offered Russian help to rebuild Libyan stability in talks with Presidency Council head Faiez Serraj three weeks ago in Amman and a four weeks earlier in Moscow.

How successful the Russians were in persuading the Misratan delegation to accept dialogue with the Libyan National Army and Khalifa Hafter is not clear. Mohamed Essa is reported to have embarked on a bitter public attack on Hafter during a press conference in Moscow.

However, Russia’s deputy envoy to the UN, Vladimir Safronkov, today told the UN security council that Khalifa Hafter’s forces should be “the nucleus of the Libyan armed forces in the future.” It was crucial that Hafter and the LNA not be marginalised, he said.

That said, the fate of Libya had to be decided by its people via dialogue Safronkov added. International attention had to focus on Libya, he insisted, and focus on working with all political parties, he said. There was no alternative. 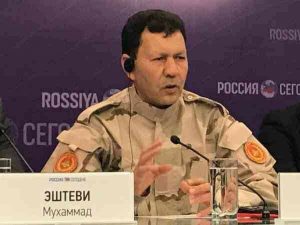 Mohamed Essa lashes out at Hafter in a Moscow press conference. The Russians had been expecting Misrata Mayor Mohamed Eshtewi to attend (Photo: Social media)

Meanwhile, in a separate Libya development in Moscow, the foreign ministry has said that it is working to secure the release of Russian sailors held in Tripoli and the return of the bulk carrier MV Merle, arrested off Zawia last month.

According to spokeswoman Maria Zakharova, top Russian foreign ministry officials have met with Serra to press the issue, but that so far there had been no movement on the Libyan side other than the fact that the sailors’ detention was extended by a courts on 3 April for a further month at the request of the public prosecutor.

The vessel is currently being held at Tripoli.