CBL conditionally agrees to Serraj call for unified board meeting 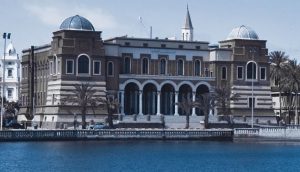 The Tripoli-based Central Bank of Libya (CBL) has responded positively to a call by Presidency Council / Government of National Accord head Faiez Serraj to hold an urgent board meeting. However, it set some preconditions.

Last week Serraj had called for the unification of the two banks in order to bring a halt to the fast deteriorating financial state of the country. This in turn came in response to a televised call by the Beida-based CBL Governor Ali Hibri four days earlier for a board meeting in Tripoli. Hibri had blamed Tripoli CBL Governor Sadek El-Kaber for Libya’s financial woes.

The Audit Bureau head Khaled Shakshak had also waded into the three-way debate on who bore responsibility for the country’s acute financial woes.

Referring to the Serraj statement, the CBL in its own written announcement said that it was ”surprised by the content” of the Serraj document. It welcomed the call to end the existence of a ”parallel” (Beida-based) CBL, adding that this was specified in the Skhirat Libyan Political Agreement.

However, the CBL insisted that an audit of both banks is carried out by an independent expert body of their respective activities so that each bank is held legally responsible for their activities since the 2014 split. This step, the Tripoli CBL explained, is part of its public accountability duties.

Having agreed to a board meeting and reunification, the CBL then pointed out that such a board meeting would not – as both Serraj and Hibri had claimed and hoped – solve Libya’s financial problems.

It pointed out that in its view, the solution lies in wide ranging comprehensive political, economic and financial policy reform which it points out it has long set out and called for. These include economic, political and security policy steps.

The country’s debt, meanwhile, had by end of October this year reached over US$ 91 bn with the CBL administering US$ 71 bn in the west while it approximated that the Beida CBL in the east had accumulated debts of about US$ 20 bn since the 2014 split.