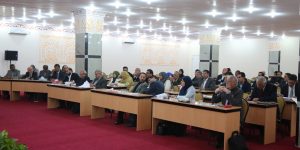 The HoR in session (Photo: HoR)

The position of Emhemed Shouaib, the first deputy president of the House of Representatives (HoR), is seen as under threat as a result of discussions in today’s session of the parliament in Tobruk.

Reacting to his constant absence, HoR president Ageela Saleh was authorised to set a committee to amend the HoR rules, according to the parliament’s spokesman, Abdullah Bulaihak. This is seen as setting in motion the replacement of Shouaib.

One of Zawia’s eight representatives, Shouaib shot to fame as leader of the HoR’s dialogue team in the UN-led negotiations that resulted in the Libyan Political Agreement two years ago. Since then he has been absent from Tobruk, based mainly in the UAE. He has, however, been spoken of as a future possible president or prime minister.

In today’s session, attended by 60 members, it was also decided that the election for a new governor of the Central Bank of Libya (CBL) would take place.

The HoR sacked Saddek Elkaber as governor three years ago and told his deputy, Ali Hibri, to take over on a temporarily basis. He has been temporary governor in the eyes of the HoR and the eastern authorities ever since, while lacking almost all the levers of power to do the job.

Elkaber has effectively remained in post because he is recognised by the Presidency Council (PC) as governor and because under the Rome agreement which preceded the Skhirat accord, all the major international powers including the five UN permanent Security Council members plus the Arab League, the EU and the African Union said that they would work only with the authorities under the control of the PC. They specifically mentioned to the CBL, the National Oil Corporation and the Libyan Investment Authority.

Apart from the position of Shouaib and a new CBL governor, the majority of today’s HoR session was devoted to discussing the UN action plan put forward by UNSMIL chief Ghassan Salamé.  Discussions focuss specifically on the process of amending the Libyan Political Agreement in line with Salamé’s proposals  and then incorporating it into the 2011 Constitutional Declaration which acts as Libya’s interim constitution..

The HoR has voted to endorse the proposals, but the State Council has not.

The HoR will meet again next week.