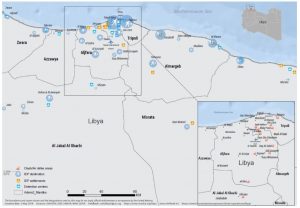 The latest situation in the Tripoli fighting as of 2 May 2019 (Photo: OCHA).

The report also inadvertently provides further independent evidence that the fighting continues on roughly the same frontline as both adversaries fail to impose their military will on the other, while on the political front the Serraj administration admonishes UNSMIL and its head for its poor conflict resolution performance.

The report says that ‘‘armed conflict continued along established frontlines during the past 24 hours’’, but with no reports of ‘‘airstrikes, rocket/shelling attacks or clashes impacting civilians or residential areas’’.

It reported that civilian casualty figures remain unchanged from the previous day with 102 verified civilian casualties, including 23 civilian deaths. These include four health workers killed, with one other doctor injured.

The report says that over 48,500 persons have fled their homes as a result of the armed conflict with nearly 6,000 new IDPs identified in the last 48 hours.

It confirms that the 15 international nurses from the Philippines have been located safely, following their evacuation from the Ali Omar Askar hospital in Sbea on 28 April, due to the fighting. It was feared that the nurses had been kidnaped or even killed.

However, it transpires that the nurses were left in the hospital following its evacuation and were picked up by an ambulance associated with one of the armed groups on 30 April. On 1 May, the international nurses and their families were located, having been safely transferred to Tarhuna hospital. The embassy of the Philippines also sent a representative to Tarhuna to see them and check their safety.

The report says that conflict-affected individuals – including IDPs, refugees and migrants, and civilians trapped in conflict areas – have had their access to health care services severely disrupted. Injured civilians and persons with specific medical needs are in urgent need of medical assistance.

On the psychological effects of the fighting, the report says that increased levels of psychosocial stress have been reported by child protection partners working in collective centres.

It reports that partner agencies this week provided a total of 403 persons (24 men, 128 women, 122 boys and 129 girls) individual and group counselling sessions through psychologists deployed in nine collective shelters. As of 30 April, the report says aid partners have reached over 2,400 IDP children with specialized psychosocial support (PSS) and recreational children in collective shelters and in urban settings. Also 376 caregivers have also been reached with PSS services and child protection awareness training. These activities help conflict-affected children cope with trauma and re-establish a sense of normalcy, the report explains.

The report says that populations affected by the conflict struggle to access safe water for drinking and to meet basic hygiene and sanitation needs.

Over 3,300 refugees and migrant remain trapped in detention centers exposed to or at risk of armed conflict, and where availability of food, water and healthcare have been severely restricted due to fighting.

The report says that mobile networks have remained largely operational in and around Tripoli, with a few sites down in the south of Ain Zara area. Increasing disruption to electricity in conflict affected areas, due to damage to infrastructure, has the potential to leave areas cut off from the mobile network, it explains. When the electricity supply is cut, mobile coverage will generally survive for up to eight hours before the tower runs out of battery power, after which localized outages occur, the report adds.

Meanwhile, on the political front, UNSMIL and its head Ghassan Salame came for unprecedented public criticism by the internationally-recognized Faiez Serraj administration. Speaking yesterday at a press conference, the official Serraj Government of National Accord Spokesperson, Muhanad Younis, said his government ‘‘deplored the performance of the UN mission and the position of Mr. Ghassan Salama, who was not at the level to solve the Libyan problem’’.

The strong criticism comes after Serraj had held a meeting with Salame in Tripoli. It seems Serraj was unimpressed by the meeting and had hoped that Salame had something concrete to offer after his international conflict resolution round.

Officially, the meeting was reported to have ‘‘discussed the situation around the capital and the efforts of the United Nations to stop the attacks and resume the political process.

Serraj had stressed that his government was ‘‘determined to defeat the aggression (Hafter) and not talk about a cease-fire before the troops withdrew to the aggressor and returned from where they came from, and stressed the need to hold accountable the perpetrators of war crimes and human rights violations that have affected civilians’’. It seems that Salame may have attempted to persuade Serraj to agree to a ceasefire and resume talks – without these preconditions.

However, repeatedly the Serraj administration have maintained the line that Hafter should pay a price for his aggression and that should be a withdrawal of his forces back to their point of origin. Serraj is determined that Hafter does not meet him at the negotiating table at all, or at best not on an equal footing and hence refuses a return to the status quo ante.

For his part, Salama was reported by the Serraj government to have ‘‘confirmed his total rejection of any attack on civilians and civilian installations, which constitutes a serious violation of international humanitarian law’’.

Salama had also stressed that the international community was aware that there was no military solution to the Libyan crisis and that every effort was being made to find a united international position to end the war.

At the press conference, Official Spokesperson Younis explicitly stated that ‘‘there is no longer a place for Hafter in the political process’’.

He stressed that the Serraj government ‘‘will have a timely response to the countries that have supported Hafter and we will not allow their plans/schemes to succeed in Libya, in reference to communications with countries and international organizations that reject the militarization of Libya and support its civilian state’’.

Younis announced that his government had assigned the relevant authorities with documenting all the crimes that occurred as a result of the aggression against Tripoli and refer them to the International Criminal Court.

The Serraj government also ‘‘hailed the group of House of Representatives (HoR) members who tried to find a solution to the current situation and called on the other members of the HoR to follow their colleagues by holding them responsible to save the nation from fragmentation and being torn apart.  The Serraj government also ‘‘stressed the need to end of the time of apathy and personal interests given that the HoR is the only body that can impose solutions on the reality on the ground and (that the HoR) knows very well that the Government of National Accord is the legitimate government that will lead Libya to security by uniting its institutions and achieving comprehensive reconciliation among Libyans.