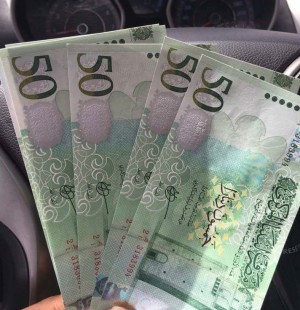 A Benghazino showed off the then new Russian printed dinars he had withdrawn in 2016 (Photo: Mutaz Gedalla, Benghazi)

The currency was again printed by Russia’s state Goznak company which had printed and successfully delivered LD 4 bn in 2016 to the eastern CBL.

The United States State Department yesterday commended Malta’s Government for announcing on 26 May that it had its seized the U$1.1 billion of what the State Department referred to as ‘‘counterfeit Libyan currency printed by Joint Stock Company Goznak—a Russian state-owned company—and ordered by an illegitimate parallel entity’’.

It added that the Central Bank of Libya headquartered in Tripoli is Libya’s only legitimate central bank. It said that the influx of counterfeit, Russian-printed Libyan currency in recent years has exacerbated Libya’s economic challenges.

It confirmed that the United States remains committed to working with the United Nations and international partners to deter illicit activities that undermine Libya’s sovereignty and stability, and are inconsistent with internationally-recognized sanctions regimes. This incident once again highlights the need for Russia to cease its malign and destabilizing actions in Libya, the statement concluded.

Nevertheless, there is confusion as to whether this is a new seizure by Malta or a reannouncement by the US of a seizure made last autumn – as part of its increased rhetoric against Russia. The eastern CBL has reportedly denied the seizure of any of its new currency.

More dinars are flown in to Tripoli to ease currency shortage