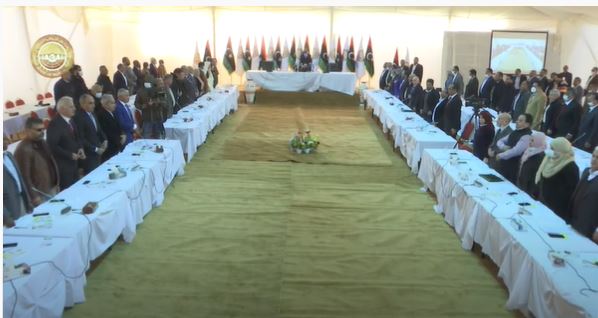 The planned meeting for today and tomorrow by the 127  unified HoR members was postponed to due lack of funds and a leadership dispute (Photo: HoR Tripoli).

The consultative meeting of 127 members of the unified Libyan parliament, the House of Representatives (HoR), planned in Ghadames today has been postponed, the Tripoli-based LANA state news agency reported today.

The lack of money and disputes over who should preside over the planned Ghadames meeting were cited in the report as the reason for the postponement. The meeting has been postponed until next week.

The report said that virtual consultations between members were taking place in order to obtain the sums required to cover the cost of transport of members to the city of Ghadames, and their accommodation expenses there.

Dispute over leadership of who leads unified HoR

However, the report also reported that another reason behind the postponement could be the dispute between eastern and southern members over who should preside over the future reunified HoR as well as over taking the necessary steps to end the Libyan crisis.

It will be recalled that in a final statement at the end of their last Ghadames meeting which ended on 8 December, the 127 members agreed to meet today and tomorrow (21-22 December) in Ghadames to continue their consultative discussions.

The final statement had said that the first session was devoted to discussing the most important issues impeding the reunification of the HoR. It had stressed that the HoR was now effectively reunified with the participation of 127 members in Ghadames. The statement had said that attending members were eager to give other members who had failed to turn up another chance to attend the next session in order to build more bridges of trust.

Today and tomorrow’s sessions were session were planned to discuss:

It must also be recalled that the internationally recognized HoR, headed by Ageela Saleh, held its own session in Benghazi at the same time as the 127 members were meeting in Ghadames. However, no more than 20 members had attended the Benghazi sessions.