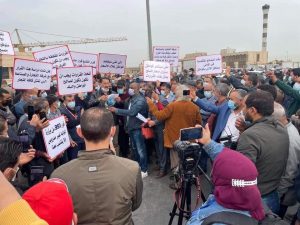 A demonstration was held in front of Tripoli port yesterday against the introduction of the ECTN goods tracking system (Photo: Social Media).

A small demonstration was held in front of the entrance of Tripoli port yesterday against the introduction by the Customs Authority of the new Electronic Cargo Tracking Note (ECTN) system.

The demonstration was coordinated by the Tripoli Chamber of Commerce and included importers, customs brokers, shipping agents, truck drivers.

Reading out a statement on behalf of the demonstrators, a representative asked: in who’s interest does the ECTN serve? He said that Ministers who introduced the system were well paid and out of touch. He said the real stakeholders were not consulted on its introduction.

He stressed that ECTN will hurt the poorer people in society most, increasing prices by anything from 15-25 percent and has led to the blockage of goods in ports accruing fines to be paid in hard currency.

Call by Chambers of Commerce and Shipping to postpone or cancel use of ECTN | (libyaherald.com)