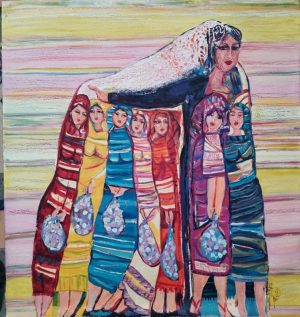 Who are they? (Shackled, trapped, frightened, sheathed) by Najla Shawkat Fitouri.

It is 2021, but the women agenda in Libya seems to be ‒ more necessary than ever ‒ at a critical juncture. In a recently war-torn country, Libyan women are suffering more from the prolonged impact of security instability, economic crises, and Covid-19, in a country that does not recognise their needs and undermines their role in society.

Throughout the LPDF process, UNSMIL ensured women were at the main peace table and that women’s voices were included by conducting consultive meetings that resulted in sharing women’s written demands in the peace process. Furthermore, UNSMIL made all candidates sign a written undertaking to have a 30% quota for women in the new cabinet. Thus far, it seems that the Libyan case could be a perfect practice for the WPS global agenda and Resolution 1325.

However, a few weeks ago, Prime Minister-designate Abd Alhamid Aldabiba declared in a press conference that he would not fulfil the 30% quota commitment. In his statement, the PM-designate also stated that women are “the sisters and the mothers”, which echoed a patriarchal stereotype that limits women’s abilities to traditional roles.

In response, a few women activists, and members of the LPDF have publicly condemned the statement and requested the PM-designate to fulfil the commitment. Shortly afterwards, the PM’s office renewed his commitment to the 30% quota for women in the cabinet. However, last week, the Government of National Unity (GNU) revealed the cabinet names; it included only three women ministers and one state minister for women affairs with a 14.5% women representation rate.

In fact, the low representation of women in the new cabinet did not surprise women who were neglected throughout the years by all previous governments. The new designated PM candidacy presentation to the LPDF was the only plan that did not include any programmes for or mention of women, which raises the concerns that women’s needs will be streamlined in the preparatory phase.

It is fair to say that neglecting women in leadership and decision-making positions is the norm in Libya. In 2017 Dr Fathi Majbri, a former member of the Presidential Council, stated during a speech to the House of Representatives that assigning a 25% quota for women representation is unacceptable for a developing country like Libya; the Faiez Serraj Government of National Accord had only appointed one female minister and two state ministers.

Libyan decision-makers and peace mediators must recognise that inclusion is not about figures and quota percentage; a gender lens must apply to all aspects of the state-building process, including election, reconciliation, economic reforms, decentralisation, security etc. Libyans must understand that leaving women behind will not impact women only but will impact society and Libya’s future.

For that reason, this Women’s Day should not be an occasion only to celebrate and honour accomplishments. It should be the day to be angry by our country’s constant neglect towards us; Libyan women must speak louder to say “enough” side-lining and demand full inclusion in the state-building phase.

Hala Bugaighis is the co-founder of Jusoor Center for Studies and Development, a Libyan think and do tank working on economic development and advocating for women economic inclusion, Hala is also a member of the Libyan Economic Commission coordinated by UNSMIL.

The views in this article do not necessarily reflect those of Libya Herald.

This article was contributed by the writer as part of a series of pieces by several Libyan females, in and outside Libya, invited by Libya Herald to reflect on International Women’s Day – ten years on from Libya’s 2011 February revolution.