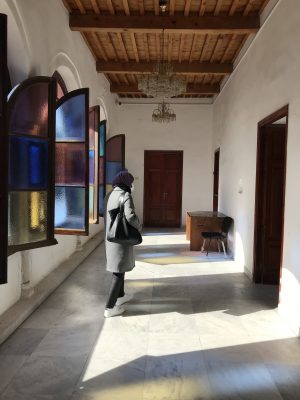 Libyan women: A tale of persistence (By Intissar Rajabany).

International Women’s Day is a fraction of time, specifically set aside to rejoice in and praise the economic, political, cultural and social achievements of women at a global scale not witnessed during the rest of the year. It also provides an outlet to mobilize for gender parity. Each year focuses on a specific theme. This year we are invited to challenge for change.

The last time I wrote about this special day in 2017, was to highlight the resilience of Libyan women, and I concluded that “even the tiniest step – that may be perceived as hardly noticeable – is for some of us, very bold.”

I come from the premise that historically women in Libya, do have a record of active involvement in the economic, political, cultural, and social development of the country. There have been and continue to be pioneers who have chosen to challenge, oftentimes slowly, by operating in a way that aims to yield the best possible results without disrupting their local context. Regardless of how humble these results have turned out they still happened, and each successive wave paved the way for the next group of women.

I like to keep that perspective in mind when pondering the topic of women’s empowerment in Libya, i.e. for Libyan women to enjoy equal opportunity and participation.

I have had the honour to be at the forefront of the movement for women’s economic empowerment in the last decade through USAID’s Libya Economic Empowerment (LEE) programme which supported economic entrepreneurial opportunities targeting women. The project ended in March 2020 and I have had a year to reflect on its journey, impact and lessons learnt and observations.

Despite substantial progress in recent decades, labour markets across the world remain divided along gender lines. Women participation in the labour force remains lower than men, while women are overrepresented in the informal sector and a higher percentage of them are poor. Legal restrictions still hamper women in a sizeable number of countries from reaching their full economic potential and the global conversation about gender wage gap has still not been resolved. Libya is no stranger to any of this with the added factor of a decade of civil war.

Women’s economic participation is a vital component of growth and stability in any country; being an oil producing country does not make it less so. The economic system under Gaddafi was highly centralized focusing on the oil industry. Private sector endeavours and entrepreneurship were neither valued nor fostered.

If the Libyan non-oil sector has knowledgeable and competitive businesswomen who operate successful and job-creating enterprises, and they have a better business support environment, adequate training, networking, and market linkages, then the private sector will be strengthened, and the economic empowerment of Libyan women will be improved. LEE contributed to this theory by providing basic business skills training to women at the start-up level, and intermediate to advanced skills training and market linkages activities to existing or aspiring entrepreneurs. Throughout this project I met an array of awesome strong, talented and vibrant women of all ages and all levels of educations from all over Libya.

These women were implementing partners, trainers, participants in the programme, government officials, inspirational guests, family members of participants, vendors and staff members. Their common denominators were passion and determination to achieve their dream. Even after a long time passed since the closure of the project the vast majority of women participants contacted were able to provide concrete examples of how the training had helped them further their careers or businesses. In cases when individuals participated in a series of linked trainings, the cumulative benefits of multiple trainings were consistently reported. Even when they may not have had the opportunity to use the skills learned the women shared with us that they were passing on these skills to others.

I am blessed to have crossed their path and to have been part of that community which reached 45,000 individuals strong at some point. My life is so much the richer from their cumulative wisdom. But the woman who touched me to the core was the mother of a young female participant. She was in her 60s, unable to read or write, but insisted on attending the entrepreneurship business skills training with her daughter. As a gesture of goodwill and because we still had the space, we allowed her to attend and found she was one of the most active participants with so much wisdom to share. She ended up submitting a project which was disqualified only because she was not the target age.

The demand for economic empowerment programming in Libya remains high; after all according to the most recent report from the World Bank – which has data up to 2019 – 34.1 % is the percentage of the females aged 15-64 in the total labour force in Libya. From my experience, in the past years there has been a major programming shift to focus on youth as being the hope of change and improvement in the society. If I have the opportunity and the latitude to work again on economic empowerment, I would make it a point to target not only youth but more mature elements of the society.

The senior women still have so much to give to build this country and so many dreams of their own to achieve. They are more importantly the keepers of large swaths of industrial and artisanal knowledge that maybe lost if not developed or preserved properly through modern business processes. Some of the more unusual projects – not necessarily from the traditionally pink sector – had come from older women. Another observation made was that to effectively support women’s empowerment, economic or otherwise young men should be part of the empowerment programming but also older men who have championed women’s rights. When done correctly both would form the backbone of support and gender equality to the women.

This past decade has given us the opportunity to get to know many contemporary Libyan women who have been trailblazers in their own right, some young and others more mature, but it also enabled us to get reacquainted with earlier heroines who made contributions that have been sidestepped or whitewashed from history.

In a discussion I was following on social media recently, one commenter said the term “women who make a historical change” can only be described for women who make a massive impact like receiving a Nobel prize, literally award, change the course of history, scientific invention etc.. and not a woman who has completed her education or made it as the first minister of defence or the first to graduate from engineering school. That is just normal. ( NOT !)

He forgot that for us to be where we are now there must have been other women for whom this was all a first. He was booed by many on the forum, but he was also supported by like minded men. I kept wondering if his negative comment would have been the same had we been talking about men’s achievements.

Libyan women should feel proud of their achievements whether they are personal or on a large scale. These achievements deserve to be celebrated after all they have been undertaken against major challenges and sacrifices.

Intissar K. Rajabany is a development professional with over 15 years of experience designing and implementing projects in the MENA region focused on social change, women and youth empowerment, inclusive economic growth, and private sector facilitation.  Intissar provides industry thought participation on economic empowerment through various regional and international industry events with a focus on women in addition to research and writing on gender and cultural practice, leadership ideals, politics, and security. She has a rich multidisciplinary background, a talent for solving problems in complex and dangerous environments, and a passion for working with people. A pharmacist by training, linguist, and communication expert, Intissar also advised foreign companies, organisations and institutions interested in working, investing in or visiting Libya. Additionally, she has over 20 years of experience in the oil and gas sector and is the co-founder of the Women in Business Committee – Tripoli. Intissar holds an MA in International Relations Theory from the University of Warwick, and a Bachelor’s degree in Pharmacy from the University of Tripoli. She can be reached at [email protected].

The views in this article do not necessarily reflect those of Libya Herald.

This article was contributed by the writer as part of a series of pieces by several Libyan females, in and outside Libya, invited by Libya Herald to reflect on International Women’s Day – ten years on from Libya’s 2011 February revolution.