Eastern based Libyan government hands over to unified Government of National Unity: Libya finally has one government! 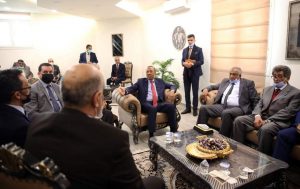 The delegation was received with garlands of flowers by several eastern officials, sheikhs and dignitaries at Benghazi’s Benina airport

In his speech to mark the occasion, Gatrani confirmed the end of Libya’s stage of division, and that the new Government of National Unity was established to serve all citizens in all parts of the country.

He also thanked outgoing eastern Libyan prime minister Abdalla Thinni and his Ministers for the efforts they had made during the past years to serve the country and the citizen.

The occasion marks yet another historic moment in Libya’s recent political history following the selection by the 74-member Libyan Political Dialogue Forum (LPDF) in Geneva on 5 February of the GNU.

UNSMIL had selected the initially 75-member LPDF (one member subsequently passed away) after the conflicting Libyan parties failed since the Skhirat 2015 Libyan Political Agreement (LPA) to move the Libyan political process forward. They failed to agree a constitution and hold elections.

The GNU was subsequently endorsed by Libya’s parliament, the House of Representatives (HoR), on 10 March and took the oath of office on 15 March.

This is the first unified Libyan government since the 2014 ‘‘Libya Dawn” Tripoli militia coup that led to the political, military and to a degree, economic split of the country.

The next possible landmarks planned before the end of the year are a possible referendum on the permanent constitution to set up the main target of elections on 24 December this year.

The grand aim is to hold these elections after the permanent constitution has been approved by the public so as to make the next elected government a fully empowered government able to take decisions to take Libya out of the present stagnant political phase it has been stuck in since the 2011 revolution that ousted the 42-year Qaddafi regime.