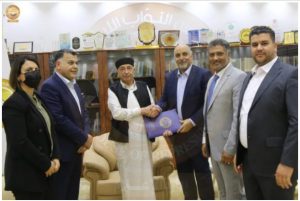 The amended 2021 budget is delivered by the government to parliament (Photo: HoR).

The budget was delivered by a ministerial delegation to HoR head Ageela Saleh to his office in his hometown of Gubba in eastern Libya.

The HoR reported that during the meeting Saleh discussed with the ministers the situation in the country and the functioning of the government during the last period. The meeting also dealt with the problem of electricity that citizens are suffering during these days as a result of power cuts and ways to overcome the problems of the electricity sector.

Parliament rejected the 2021 budget, returned it with numerous amendments

It will be recalled that the Aldabaiba government had initially delivered its proposed LD 96 billion 2021 budget to parliament on 17 March.

The five sections of the budget were:

The projected sources for this budget were:

However, parliament rejected the initial budget and sent it back with numerous amendments.

The main reasons for its rejection were:

2021 budget to be discussed at Monday’s HoR session, delays due to errors in content and switch from fewer Serraj ministries to increased Aldabaiba ministries | (libyaherald.com)