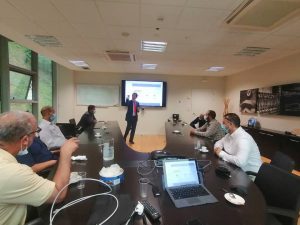 A delegation from Libya’s Airports Authority visited yesterday the factory of the Spanish company Ulma in Bilbao. Ulma specializes in the manufacture of airport baggage weighing and baggage belt systems.

The LAA said the visit was in order to determine the manufacturing stages of the systems contracted by it to be installed at Mitiga and Misrata airports.

The Libyan delegation included the head of the Safety Equipment Department, and specialized engineers from the Authority, Mitiga and Misrata airports.

The visit included conducting a training course to introduce the mechanism of the equipment’s operating system, diagnosing it, its faults and maintaining it – with the aim of raising the efficiency of the Authority’s cadres in this technical field.

It will be recalled an LAA delegation had conducted a tour and meetings with various companies in Spain in January this year. It also met the Spanish Transport Minister and agreed an MoU.