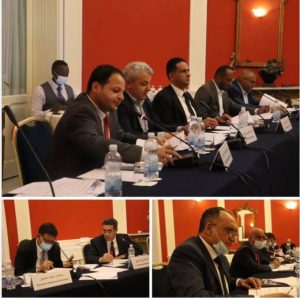 The House of Representatives (HoR) Committee responsible for drafting the 24 December 2021 election laws completed its work yesterday, according to HoR member Salah Suhbi.

The Committee had been meeting in Rome from 26-29 July with technical input from the High National Elections Commission (HNEC) and UNSMIL.

Posting on his personal social media account yesterday, Suhbi said ‘‘We completed today the detailed discussions related to the articles for the first law in Libya’s history by which the President will be directly elected by the people, as well as the law to elect the next House of Representatives (HOR), (in) the meetings (in Rome) with the Head of Libya National Electoral Commission (HNEC) and the United Nations Support Mission in Libya (UNSMIL).’’

Suhbi explained that ‘‘After the draft is discussed in the HoR and voted on will it be the basis by which direct presidential and direct parliamentary elections will be held on the 24th December 2021 so the Libyan people alone will choose who will govern the country. This paves the way for full transition, God willing, to the permanent phase of state.’’

‘‘We will present the results of our work to our colleagues so MPs can discuss and approve the law, the outcome will be the establishment of a comprehensive peaceful democratic path for both the executive and legislative in Libya.’’, he concluded.

Suhbi was referring to the announced HoR meeting on Monday (2 August) in which the HoR said it would vote on the draft election laws.

The HSC and LPA?

However, Suhbi failed to mention the fact that if the HoR does indeed go ahead and pass these laws, this would be a unilateral and controversial as far as the High State Council (HSC) is concerned. This is because the 2015 Skhirat Libyan Political Agreement (LPA), which is still valid, stipulates that all major political decisions must be reached in consensus with the HSC.

The HSC believes that the LPA is still paramount and objects to the elections being held without the holding of a referendum on the current draft constitution.

Another reading of the LPDF’s Roadmap?

However, there is another reading of the Libyan situation which holds that the Libyan Political Dialogue Forum’s (LPDF) Roadmap, which gave birth to the new Government of National Unity and Presidency Council, has prominence over the LPA and makes no specific reference to the HSC or consulting it on election laws. Many HoR members hold this view and see the drafting of laws as the exclusive concern of the HoR. The HSC disagrees with this reading.

For detailed background to the ‘‘constitutional basis’’ controversy see:

HoR to hold session ‘‘to complete’’ budget law, election law, electoral districts, and the position of head of Intelligence | (libyaherald.com)

Over 51,000 new voters recorded on the electoral register | (libyaherald.com)

We must do everything to ensure potential internal and external spoilers do not derail Libyan elections: U.S. Representative to the United Nations | (libyaherald.com)

Hafter calls on Aldabaiba government to implement the Berlin Agreement in full | (libyaherald.com)