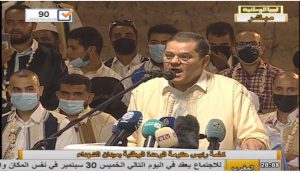 Ageela Saleh, Speaker of the House of Representatives (HoR), handed Prime Minister Abd Alhamid Aldabaiba a huge public relations victory with last Tuesday’s vote-of-no-confidence. This, as well as the HoR having failed to approve any of the government’s proposed budgets but also failing to come up with an amended alternative, made Aldabaiba into an instant hero – in western Libya at least.

This put the government on the higher moral ground with the general public – a point that Aldabaiba rammed home Friday night before the tens of thousands gathered demonstrators in Martyr Square.

Aldabaiba had called for Libyans to come out and demonstrate against the HoR for withdrawing confidence from the government – and thousands did, according to Aldabaiba from all over Libya.

The optics were powerful and sent a strong message. Leaving aside that the government would have done its best to ensure a large crowd was gathered and maybe a few thousand could be labelled as a ‘‘rent-a-crowd’’ – the optics and perception were effective.

The message was loud and clear: the HoR were the obstructionist bad boys while Aldabaiba and his government were attempting to do so much – despite the HoR not granting them a budget.

Prodding the crowds, Aldabaiba said ‘‘No to war, no to funeral wakes. Libya is one. Libya is united. Yes to development, peace, youth, life, and wedding tents (as opposed to funeral tents.) To which the crowds shouted ‘‘the people want the downfall of parliament’’

Aldabaiba in a win-win against Saleh?

Aldabaiba took advantage of the occasion to review his governments’ policies and achievements, even though most are simply announcements of intentions to carry out policies. If Aldabaiba is forced to leave office because of an election, then he cannot be blamed for not having the time or being granted the budget to implement his policies.

If elections fail to be held – which is now increasingly likely with less than three months to 24 December – Aldabaiba can still argue the HoR hindered progress by refusing to approve the budget. Equally, it is the HoR and High State Council who have failed to reach consensus on the constitutional basis and the election laws – not the government.

Perception is important: a battle for the hearts and minds

The reality in this case is not important. Ageela Saleh is fighting a ‘‘hearts and minds’’ battle with Aldabaiba for the Libyan public, and the perception is that Aldabiba wants to spend money on his people while Saleh does not. Aldabaiba played on this emotion in his speech. The crowds ended up hailing him by singing his name. They definitely did not sing Saleh’s name.

Aldabiaba leveraged the recently decreed salary rises as well as his populist marriage and youth grants. He highlighted how the government has passed numerous decentralization decrees which would allow local government to raise revenues and spend them locally.

All these announcements made the Aldabaiba executive come across as being proactive and Aldabaiba used the stage to contrast his government with the moribund parliament which has been in power since the 2014 elections – yet has failed to extract Libya out of instability and a quagmire of regression.

It is your money

Rubbing in the HoR’s objection to Aldabaiba’s spending spree, Aldabaiba told the crowds ‘‘They say we wasted money on you. It is your money. They don’t owe you anything. I am here to serve you.’’ To which the crowd reacted with a huge cheer.

On the anti-Coronavirus vaccine, Aldabaiba again reiterated how while it was difficult for many nations to get their hands on them, his government was able to source them. We obtained them to protect you, he explained.

Grants to youth – always a winner

Playing on Libya’s demographics and the fact that over 60 percent of Libya’s population is under 30 years old, Aldabaiba vowed to set up a Youth Bank to offer LD 15 bn’s worth of house loans. He got another huge cheer. This is what the HoR refers to as corruption and exorbitant spending, he said sarcastically.  He also vowed to offer development grants. He said his government could not hide the money while the people are in need. To another huge cheer he also vowed that all outstanding wages will be paid.

Wait until after the elections?

Aldabaiba taped into the 10 years of simmering frustration endured by Libyans since the 2011 revolution overthrew the Qaddafi regime. Playing on the public’s impatience and frustration caused by numerous ineffective interim governments, he said we want to live like our neighbours. Why are we waiting? We have been patient for 10 years. We cannot wait any longer. We cannot go back. Let the world hear you, ‘‘No to war, yes to peace, life, stability of Libya. Yes to elections and Libyan democracy’’. Libya, Libya, Libya…..’’ he shouted.

A message to Hafter too

Building on his ‘‘no to war and destruction’’ and ‘‘yes to development’’ message Aldabaiba went further by contrasting his vision of a unified army and sending a message to Khalifa Hafter. Hafter had announced his temporary standing down as head of his eastern-based Libyan Arab Armed Forces (LAAF) in preparation to standing at the next elections.

Aldabaiba told the crowds he wants to create ‘‘one army whose loyalty is to God then the nation. He said we will not have an army that is aligned to tribe or person (Hafter!).

Elections are your right. Your voice is your right. Demand what you want. ‘‘The train of development and life has departed’’, he added.

Parliament and the Aldabaiba disagree on role of Unity Government

Libya’s parliament and the Aldabaiba Government of National Unity have a fundamental disagreement on the role of government. That is clear. Parliament wants the government to engage in minimal spending and act as a caretaker government concentrating on reunifying state institutions, providing basic services such as electricity, fuel and cooking gas, liquidity, security and preparing for elections.

They do not want an expansive government spending billions on development and projects. They see that as a job for the next elected government. They feel the government and other state institutions are not strong enough to prevent corruption – and suspect that the government might be corrupt too.

They also regard this government as an ‘‘Islamist’’ government allied to Turkey and Qatar and backed by certain western Libyan militias.

They do not want the government to engage in populist and popular policies that would give it or its allies/backers a springboard for future elections.

Aldabiaba sees economic progress, development, and the restarting of projects as an essential part of peace and stability. Creating jobs and business for youth is part of his vision to re-employ youth and discourage them from crime and militia work.

Whilst Khalifa Hafter has taken temporary leave – presumably to prepare for elections – Ageela Saleh has not yet announced his candidacy for the next election. And in theory, Aldabaiba should not be able to stand at the next election. All candidates who took part in the Libyan Political Dialogue Forum’s (LPDF) selection process, which brought Aldabaiba into office, had signed an undertaking not to stand at the 24 December elections. However, you would be forgiven for mistaking Aldabaiba’s Friday speech as the perfect launch of an election campaign.

If Libya conducted regular political opinion polls, Ageela Saleh would be well behind this week. Winning enough votes in the most populous region of the country – western Libya – is going to be hard for Hafter and Saleh.

BREAKING: Libyan government loses vote of no confidence – carries on as a ”caretaker” government | (libyaherald.com)

Elections not just moral or political commitment, but a political and security necessity. Aborting elections may lead to violence: Kubis to UNSC | (libyaherald.com)