HoR members consider Tarhuna mass graves as crimes against humanity, call for perpetrators to be brought to  justice and national and international condemnation 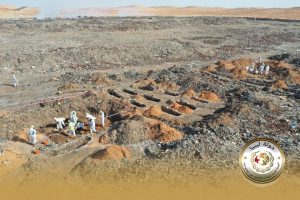 Fifty-six members of the House of Representatives (HoR) consider the mass graves discovered in Tarhuna as crimes against humanity. The sentiment was expressed in a statement dated 13 October by the members and published on social media on official HoR headed paper.

The members demand that the perpetrators of these crimes be brought before the judiciary, expressing their astonishment at international and local silence for not condemning them.

Notably, the statement was signed in Tripoli rather than Tobruk, the official headquarters of the HoR.

The statement by the 56 HoR members comes on the back of the announcement on Tuesday that another 25 unidentified bodies had been recovered from the mass graves at the Tarhuna public landfill site.

This brings the number of recovered bodies in the various Tarhuna mass graves to over 220.