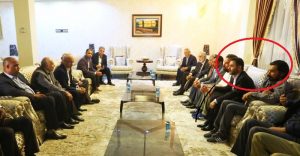 The three kidnapped Turkish engineers were freed on Saturday and returned to Turkey on the same day (Photo: PC).

They arrived on Saturday night at Tripoli’s Mitiga airport on a flight from Ghat airport and were flown on to Istanbul on the same night.

The three engineers had been kidnapped 230 days ago – on 3 November 2017 on their way to the Ubari power station by unknown militias. Their kidnapping had led to work on the power station to come to a halt as less than a week later, the ENKA pulled out all remaining 93 staff working on the new Ubari power station. Germany’s Siemens had already pulled out its staff on the project.

The three ENKA engineers had been welcomes at Mitiga airport on Sunday by a delegation led by the Presidency Council’s Foreign Minister Mohamed Siala, GECOL’S chairman and the Turkish ambassador to Libya Ahmet Dogan.

It will be recalled that at the time, ENKA had waited a week to see if the kidnapped victims would be released before making a total withdrawal from the Ubari plant.

The ENKA engineers were actually working for German company Siemens. The following day, the German firm was understood to have flown out all its engineers working on the project.

The 640MW Obari power station is almost complete. Tests were being conducted on the last of its four turbines. However, someone close to the project said that a pipeline from the Sharara oil field had not yet been completed. At the moment fuel was still being delivered by tankers.

The Turkish pull-out proved disastrous for Libyan attempts to woe back foreign contractors by GECOL and the National Oil Corporation (NOC) which has important repair and maintenance projects that need outside technicians.

In January 2017,  ENKA only agreed to resume work on the sorely-needed Ubari power station if the state electricity company, GECOL, could guarantee the safety of foreign contractors. It also insisted that regular scheduled flights be put in place between Ubari airport and Tripoli’s Mitiga.

Serraj concerned that Obari kidnappings could damage collaboration with Turkey

Construction at Obari power station to move forward as planned

Power returns gradually after total blackout to most Libya