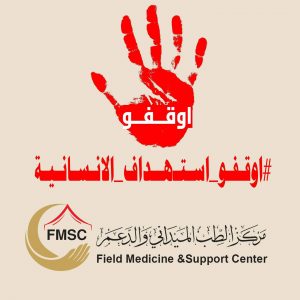 The banner by the Field Hospital Department says stop killing humanitarian personnel after 5 were killed and 8 injured yesterday by an air strike on the Airport Road Field Hospital (Photo: Tripoli Moh).

The Tripoli-based Ministry of Health, aligned to the Faiez Serraj Presidency Council and Government of National Accord condemned in the strongest terms the bombing of the Tripoli Airport road field hospital by a warplane yesterday.

The attack was not attributed to anyone by the Tripoli Ministry of Health, but the airstrike is widely attributed to the Khalifa Hafter-led Libyan National Army (LNA).

The Tripoli Ministry of Health reports that the attack killed five Field Medicine and Support Service personnel and eight other medical personnel working in the field were injured. The attack also damaged the hospital.

The Tripoli Ministry of Health said that it considers that such horrific and repeated attacks and violations from the beginning of the war on the capital Tripoli go against all local and international humanitarian laws and violate the charters and customs that criminalize the targeting of medical personnel and health facilities.

It added that this attack is added to the list of previous unjustified attacks on the Libyan health sector and its workers.

The Ministry of Health stressed and reminded that the health sector in various health centers, including field medicine and support, has a duty to provide for the injured, to provide the medical needs of the displaced, and to evacuate civilians stranded in sites of military engagement.

The Ministry said that it is has recording all these crimes and violations, which it will report to the authorities responsible for prosecuting the aggressors of doctors and health facilities.