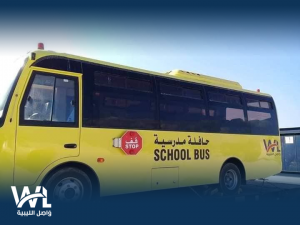 The first batch of the new fleet of school buses for Wasel company, a private sector company owned by the Bank of Commerce and Development, arrived in Benghazi last week (Photo: Wasel/Rahal).

The new school buses belonging to Wasel Transportation Company, established by the Bank of Commerce and Development (BCD), arrived in Benghazi last week.

The launch of Wasel came as part of the LD 150 million Waad (promise) finance programme announced by the BCD to help Libyan youth by offering finance for SMEs that was announced in September 2018 in Benghazi at the Second Libyan Banking Forum.

The BCD said that Waad is a national development program to help diversify and revitalize Libya’s economy and promote its private sector. It aims to support youth projects and encourages them to establish economic and industrial projects.

Part of Wasel is its Rahal taxi/mini-cab service which operates through an App on the lines of Uber. Rahal involved BCD importing over 100 cars initially for Benghazi, which has been running since January 2019. The service was launched in Tripoli in March and Tobruk and Beida in June. BCD said that it will continue to roll it out to other Libyan cities.

The BCD then offers interest-free loans/hire purchase package to Libyan youth to work for Rahal while owning their own car.

The BCD also co-launched the new private sector airliner, Berniq Air, in December 2018 with LD 200 million capital in which it owns a 40 percent of shares.

On another note, it will be recalled that the first batch of ‘‘city bus’’ model of new public transport buses arrived in Tripoli port from China in August, operators Asahem Company for Public Transport had said.

Second Libyan banking forum to be held in Benghazi