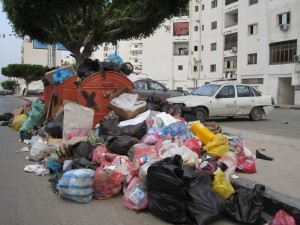 Libya has struggled for decades with rubbish collection and recycling (Photo: Tripoli rubbish. From archives by Tom Westcott).

The Municipality said this was part of the eastern based ‘‘Libyan government’s’’ wider efforts to recycle waste in the eastern region and solve the ongoing problem of accumulated roadside waste.

Al-Beida Municipality reported that the recycling plant would be installed in the coming days next to it main garbage dump. It envisioned that it will contribute effectively and radically to the elimination of the phenomenon of garbage accumulation in the municipality and reduce its possible negative impact on citizen’s health.

It is worth recalling that there are efforts across Libya’s political divide – east and west – to resolve Libya’s perennial waste collection problem.

The German company was reportedly invited to submit proposals on a BOT basis for the project through the eastern Ministry of Local Government.

Meanwhile, in western Libya various projects for waste collection/recycling were announced last year by Tajura, Sug Juma and the Municipality of Central Tripoli as well as the city of Misrata.