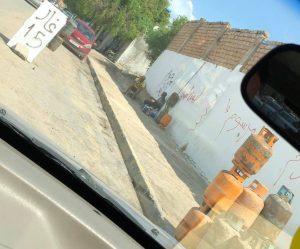 Cooking gas cylinders were selling at the black-market rate of LD 15 yesterday directly opposite an official Brega distribution depot. The official price at the depot is LD 3, but it had no supplies left. The depot is  suspected of being a militia racketeering operation (Photo: Libya Herald).

Some areas of Tripoli have been without electricity for four consecutive days, Tripoli resident Ali told Libya Herald this morning. He asked that his surname be withheld in view of his militia comments (see below).

Ali conveyed how the lack of electricity has had a negative knock-on effect on most of the basic utilities of modern life: mobile phones, internet, water etc. The power cuts have led to youth blocking main streets with burning tyres in protest.

Power cuts have been one of the main – but not the only – grievances of recent demonstrations across the Libya which had led to a major political fallout, including the shooting at protesters, the suspension of the Tripoli Interior Minister and the offer by both Libya’s western and eastern Prime Ministers to resign.

Ali said life is ‘‘awful’’ and that many areas ‘‘wake up and go to bed in darkness’’, adding that the ‘‘high temperatures make it even more unbearable’’.

No power, no mobile phone or internet

‘‘If you don’t have a generator and cash (there is a cash shortage at banks too!) to buy diesel from the black-market, and internet access supplied by one of the private company suppliers – you cannot survive”.

”The power outages have badly impacted the mobile phone reception. There is no Libyana or Madar mobile phone coverage unless you drive to Al-Shat road (the main Strand/Corniche road) where the reception is a bit stronger. And because mobile reception is down, no one can use mobile data for internet. The 4G service is almost dead too’’, Ali added.

No power, no water

‘‘Least but not least, there is no water. When there is no power, the Man-Made River water pumps are also affected and stop working and cut the water supply to coastal cities’’, he lamented.

‘‘Yesterday (Thursday) morning I tried so hard to replace my cooking gas cylinder from any of the official Brega distributors, but it was impossible. I found young people just next to the main gate of a Brega depot selling cylinders for LD 15, whereas a cylinder costs (officially) just LD 3 a few meters away inside the depot’’. Gas cylinders have reached LD 30 – 60 in Tripoli and south Libya in the past.

Highlighting the gas cylinder racket Ali said the depot seemed ‘‘to be controlled by militias who prefer to do business with black-market dealers to make easy money.’’

‘‘Simply: we live in hell, or as we say in Libya ”عايشين من قلة الموت’’ , concluded Ali, which roughly translates to ”we are still living due to the lack of death”.