Libya’s Union of Chambers of Commerce holds discussions in Tunisia 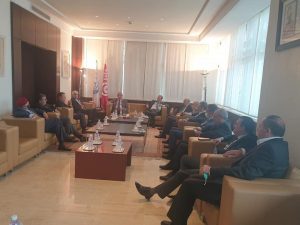 The head of the Libyan General Union of Chambers of Commerce, Mohamed Raied, held discussions yesterday with Samir Majoul, head of the Tunisian Union for Industry, Trade and Handicrafts at the latter’s headquarters in Tunis.

The Libyan Chambers Union reported that the session dealt with the economic relations between Tunisia and Libya, where the importance of mutual economic integration was emphasized, and the obstacles that prevent the further development of bilateral cooperation, whether at the level of trade exchange or joint investments, were reviewed.

The work session was also attended by Chairman of the Economy, Trade and Investment Committee of the Libyan Parliament, and Haykel Makki, Chairman of the Finance, Planning and Development Committee of the People’s Council of Representatives, in the presence of a number of members of the Federation’s executive office and members of the Libyan-Tunisian Joint Economic Chamber.

Libya-Tunisia border will not be closed under any circumstances: Tunisian PM Mechichi | (libyaherald.com)