BREAKING: LPDF Geneva elections fail to secure winner in round one, round two vote-off after lunch between top two lists 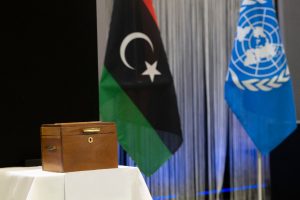 The first round of LPDF voting in Geneva failed to produce an overall winner for Libya’s next unified government. Round two this afternoon will be a vote-off between the top two lists (Photo: UNSMIL).

None of the candidates’ four lists standing for selection to lead Libya’s next interim, temporary, unified government have succeeded in securing the stipulated 60 percent threshold during this morning’s LPDF elections in Geneva.

List number four led by Ageela Saleh (to head the Presidency Council) and Fathi Bashagha (to be Prime Minister) gained 25 votes. Saleh is from the east and is the current head of the House of Representatives. Bashagha is from Misrata and he is the current Interior Minister in western Libya.

There will now be a second round of voting after lunch between the lists that obtained the most votes in round one; list four and three.

The threshold for the second round is 50 percent + 1 of the valid votes.

Here are the detailed results of round one of voting:

Ageela Saleh’s virtual hustings: War on Tripoli was a mistake, time to turn over the page | (libyaherald.com)

LPDF first round of voting for PC fails to meet 70 percent threshold – move to list system next | (libyaherald.com)