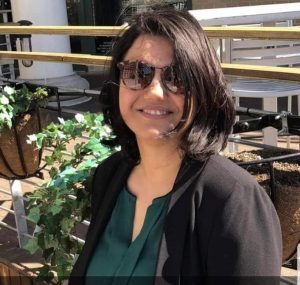 Libya’s new Foreign Minister is Najla Mohamed El-Mangoush. Fluent in English, she trained as a lawyer at Benghazi university and was later an assistant professor of law there.

Subsequently she was a Fulbright Scholar in the US and is a graduate of the Center for Justice and Peacebuilding at EMU university in Virginia.

As a conflict-resolution expert, she was the country representative in Libya for USIP (United States Institute of Peace).

She has served as the Program Officer for Peace-building and Traditional Law at the Center for World Religions, Diplomacy and Conflict Resolution in Arlington, Virginia and has a PhD in conflict analysis and resolution at George Mason university.

Aldabaiba had promised that women would account for 30 percent of his government – as prescribed at the Libyan Political Dialogue Forum (LPDF) in Geneva. In the event just four ministers are women – a proportion of just 14 percent, half what was promised.

Aldabaiba had revealed at his first press conference in Tripoli, after his selection by the LPDF, that the 13 constituencies had not put forward women for ministerial positions. This excuse met with a huge outcry on social media forcing him to make a hasty retreat and promise he will appoint some and in high positions.

In his speech to the HoR Aldabaiba said he fully supported women’s representation in government and gave a commitment to ensure that the 30-percent figure – or more – will be achieved through appointments of Deputy Ministers.