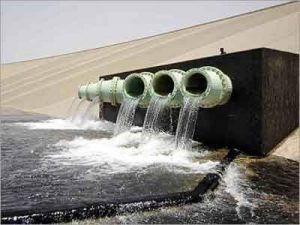 The MMR calls for increased security to avoid the water supply system collapsing due to continued sabotage of its wells (Photo: Man-made River).

Continuing attacks, theft and vandalism on (Hasawna) Manmade River water (MMR) wells threaten the collapse of the entire system and interruption of water supply to most cities and agricultural projects, the Manmade River Project said yesterday.

The statement came after an attack yesterday on water well number C3-79 in the southern field of which before the attack was among the most productive water wells with a daily production rate of more than 5,000 cubic meters of water per day.

The MMR said the attack comes after an attack on well 241 a week ago.

The MMR lamented the fact that these attacks occur because of the inability and complete absence of the (MMR) Project Protection Brigade located in the water well fields, despite the support granted to it by the MMR.

The MMR reiterated that the concerned authorities should intervene urgently to protect the wells and deter saboteurs to avoid a system collapse.

Man-Made River has remained out of politics and acted as a unifier: MMR chairman | (libyaherald.com)

As another well is attacked, the Man-Made River Authority reports 149 water wells attacked despite appeals to the state for security | (libyaherald.com)