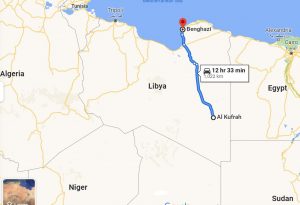 The Man-Made River Road between Benghazi and Kufra will be made part of the international transit trade route and will be offered for investment (Photo: Google Maps).

Benghazi’s Elmreisa Free Zone (EFZ) announced Sunday that it had agreed in principle with the Man-Made River Authority and the Ministry of Transportation to form a joint working team to lay the foundations for the presentation of the Man-Made River Road from Benghazi to Kufra as part of the International Transit Route. The EFZ said the project will be offered up for investment.

Rather than construct a brand new road spanning over 1,000 km to Kufra, it was decided best to go into partnership with the Man-Made River.  The existing Man-Made River service road along the route is overwhelmingly a dirt track which will need upgrading and improving.

It will be recalled that in July this year, Libya’s Transport Ministry had approved in principle the building of a transit trade road to Africa and the establishment of a free zone in the city of Kufra. 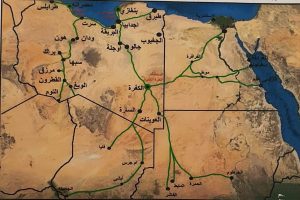 The EFZ imagines that its Transit Trade Route will link Europe with the rest of Africa and beyond (Photo: EFZ).

The activation of the transit zone/route, the free zone in Kufra, and the EFZ are linked and are seen as complimenting each other. They are also seen as part of the revival of spatial development along the route, revitalizing it commercially and linking it to north and south trade.

Jobs and revenues away from hydrocarbons

The project is also seen as another way of providing new jobs and diversifying Libya’s economy and revenues away from hydrocarbons.

The linking of coastal libya with south libya and of a coastal based free zone with a southern free zone is not a new concept in Libya. Misrata Free Zone has a base in the southern airport of Taminhent in anticipation of north-south-north transit trade.

Free, economic and logistics zones, and transit trade to be activated in south | (libyaherald.com)