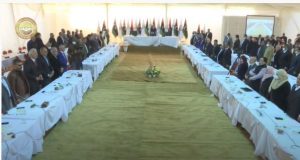 Over 100 of the Ghadames bloc of HoR members aim to meet in Sabrata tomorrow to discuss approving the new Presidency Council and GNU prime minister (Photo: HoR Tripoli).

Over 100 members of the ‘‘Ghadames bloc’’ of the Libyan House of Representatives (HoR) plan to hold a consultative session in the western coastal city of Sabrata tomorrow.

The 74-member LPDF was selected by UNSMIL to represent all of Libya in view of the failure since 2015 of the HoR and the High State Council in carrying out their jobs of passing the country’s draft constitution and holding constitutionally based general elections.

The Ghadames bloc consists of 127 HoR members that had met face-to-face for the first time after the HoR split into two blocs, one in Tripoli and one in Tobruk. The Ghadames bloc first met in Ghadames on 8 December last year.

They had also planned to meet in Ghadames again between 21-22 December to discuss a pre-agreed agenda, however, the meeting was postponed due to lack of funds to arrange the meeting and disputes over leadership.

They subsequently held their second session virtually on 21-22 December where they discussed the proposal submitted by the committee formed in Ghadames to amend the HoR’s internal regulations.

The session was chaired by the oldest member, Abubaker Beira, and discussed

The interim presidency of the HoR had stated at the time that these deliberations will be sent to the committee to amend the internal regulations to be taken in the final amendment that will be voted on in the city of Ghadames as soon as the Coronavirus situation in the country improves.

LPA and internationally recognized HoR bloc and need for a quorum

It must also be recalled that the Ghadames bloc does not include the internationally recognized HoR bloc of 20 members, headed by Ageela Saleh, who meet in Tobruk and Benghazi. To clarify, it is this HoR that is recognized under the 2015 Skhirat Libyan Political Agreement (LPA), and hence the UN and international community.

It is therefore this HoR bloc that needs to approve the newly selected Presidency Council and GNU prime minister and his government. However, both blocs need one another as the endorsement would need a quorum of members. Hence the discussion over where they will meet and whether they would accept Ageela Saleh as chair of the meeting. Saleh is rejected by most western and Tripolitania HoR members for supporting Khalifa Hafter’s war on Tripoli.

The planned Sabrata session aims to study a mechanism for adopting the newly selected executive authority, and whether this will be achieved through a direct face-to-face voting process session or through virtual electronic means, as has been used widely by UNSMIL in its LPDF sessions.

The session will also discuss how and who will chair the session. Options include holding them under the chairmanship of the First deputy heads of both the breakaway Tripoli HoR and the internationally recognized Tobruk HoR. Another is by the oldest member of the HoR and that the rapporteur to be the youngest member.