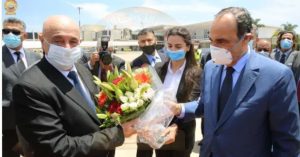 It will be recalled that Morocco had hosted in Bouznika members of the House of Representatives and the High State Council in February and March for talks on the appointment of Libya’s key Sovereign Positions.

Agreement has been difficult to reach

Agreement on the positions has been difficult to reach despite both parties announcing in the January meeting that criteria for choosing the positions had been agreed. In reality, the conflict is over the political/geographical distribution of these positions, with the head of the Central Bank of Libya being the most controversial and sought-after.

Postpone appointments until after the 24 December elections?

There is the other status quo argument that suggests that this is the wrong time to shuffle all the Sovereign Positions and that such a long-term move should be left to the newly elected parliament after the 24 December 2021 elections.

A committee had been formed to receive nominations for each position. It stopped receiving nominations at the end of January.

The seven top sovereign Libyan positions are the:

Although the official statements from both the HoR and HSC make no mention of the geographical distribution of the positions, unofficial reports by participants in talks say that the heads of these positions have been provisionally distributed as follows:

The independence of the judiciary

It must be noted that both the positions of the Attorney General and Head of the Supreme Court have now been appointed with little political interference.

UN and U.S. confident that Libyan dialogue in Rabat, Morocco will have positive impact | (libyaherald.com)