Aldabaiba holds meetings on the back of the Tripoli militia clashes – orders investigations and punishment of those at fault: Report and analysis 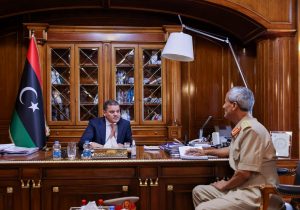 In his meetings following the Tripoli militia clashes, Aldabaiba has ordered an investigation and wrongdoers be held to account (Photo: GNA).

The first meeting, which included the Director of the Military Intelligence and designated Chief of General Staff, was referred to as an ‘‘accountability session’’ by the government. In the meeting, the two presented a detailed report to Aldabaiba.

The government reported that Aldabaiba stressed that these actions are unacceptable and those who contributed to their commission must be punished, and he gave his instructions to those assigned by the Supreme Commander to complete the investigation and come up with the results clearly to take the necessary decisions in this regard.

The Chief of Staff was also tasked with forming a fact-finding committee to present its results within a week.

The Prime Minister also instructed the necessity of completing the administrative and technical structure of the Chief of Staff and its affiliated bodies, through which the military hierarchy is maintained.

Earlier in the day, the government had reported that Aldabaiba had also met the Military Prosecutor, Major General Masoud Rahouma, where he assured him of the need to expedite the ongoing investigation related to the state-recognized militia clashes, as well as to take the necessary legal measures.

The 444th Brigade Fighting Force is affiliated with Abdul Basit Marwan and led by Mahmoud Hamza of the Defence Ministry and the Stability Support Agency led by Abdul Ghani al-Kikli, Ghnewa, affiliated with to the Interior Ministry.

The narratives for the real reasons for the clashes are still numerous and unclear with claims and counterclaims by all protagonists.

It is hoped that the fact-finding investigation set in motion by Aldabaiba and the action by the military prosecutor might lead to more clarity.

While Abd Alhamid Aldabaiba’s attempt to grasp the nettle over Thursday/Friday’s overnight militia clashes in southern Tripoli by instigating investigations and urging punishment be handed out to wrongdoers is commendable – it’s the results of these intentions that will be assessed domestically and internationally.

Rarely have Libya’s militias – who have taken over the mantle of Qaddafi’s Revolutionary Guards as the self-appointed guardians of the 17th of February 2011 revolution – been punished for their wrongdoings. They act as judge, jury and prosecutor in Libya and no Libyan government since 2011 has been able to face them down.

Aldabaiba talks of the need to impose the rule of law, establishing state institutions, creating unified army and police, and holding democratic elections on 24 December 2021. But its his actions rather than his words that he will be judged on.

These are state-recognized militias, armed and paid by the Libyan state with the full approval of the Libyan government of the day. In other words, Aldabaiba signs off on their monthly state-sector salaries. Moreover, Aldabaiba has made the conscience political decision to appoint himself as the Defence Minister – refusing to yield to House of Representatives and Presidency Council pressures to appoint a stand alone Defence Minister. In otherwise, on more than one level: the buck stops with him.

An opportunity to reform the militias?

The militia clashes over the weekend can be seen and exploited by Aldabaiba as an opportunity to attempt to reform the militias and wheel them in into increased state accountability. Leveraging domestic and international anger at the clashes, Aldabaiba can manipulate the incident to force some concessions out of the militias.

Commenting on the militia clashes Friday, UNSMIL urged authorities to initiate ‘‘an elaborated comprehensive Disarmament, Demobilization, and Reintegration (DDR) and Security Sector Reform (SSR) process to bring all the arms under the control of the State.’’

Judging by events since the 2011 revolution, it is unlikely that one Libyan government – let alone an interim government – is going to engage in the wholescale SSR/DDR of Libya’s militias. But every government can push the boat out a little further – achieving little baby steps of piecemeal reform.

SSR and DDR had been an integral part of the 2015 Skhirat Libyan Political Agreement (LPA) and the failure by the Faiez Serraj Government of National Accord (GNA) to implement any realistic SSR/DDR was ostensibly one of Khalifa Hafter and eastern Libya’s grievances with the then Tripoli government.

Monopoly on the use of force

Many critics would say that it was one the Tripoli government’s – and Libya’s – major failures since 2011. The failure to establish a monopoly on the legitimate use of force has extenuated the weakness of the Libyan state. It has prevented it from imposing security and the rule of law and has sent a negative message domestically and internationally about the stability of Libya.

This message of instability and insecurity has manifested itself in foreign embassies and international companies refusing to return and open shop in Libya.

Apportioning blame and punishing somebody – even a scapegoat(s) would begin to send the message to Libya’s militias that they can no longer continue to act with total impunity. The various post-Qaddafi era governments have had over ten years since the revolution to seriously tackle the issue of militias. Sooner or later, somebody has got to draw a line in the sand for Libya’s militias.

Failure to act would send a negative message

Aldabaiba must not brush the incident under the carpet or engage in a whitewash report. He must be seen to be acting against the members of the two militias who fired arms near a densely populated area – without the orders of their superiors.

If used correctly, the incident could provide Aldabaiba with a great and overdue opportunity to make a stand in the battle of Libyan government versus militias.

UNSMIL concerned by militia clashes in Tripoli, calls for initiation of DDR | (libyaherald.com)