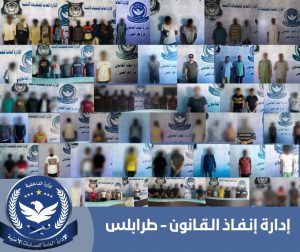 105 arrests were made by the police in Tripoli from June to August this year. This comes as part of the government’s Law Enforcement drive (Tripoli Police).

The Tripoli Police Law Enforcement Administration Branch in the General Administration of Operations revealed yesterday that during the three months of June to August this year, it made 105 arrests in the capital.

These were arrests prompted by orders from the Public Prosecution for people wanted for several criminal cases such as murder, coercive theft, armed robbery, fraud, and extortion, as well as people escaping from prisons and those sentenced to prison for committing a number of crimes.

The police department said it also took all legal measures against the arrested and referred them to the competent authorities.

The wide arrests come as part of the Abd Alhamid Aldabaiba government’s wider move and policy of ‘‘Law Enforcement’’ which has ranged from returning private property to owners occupied by smaller rogue militias, to returning public property encroached upon by citizens to seeking and arresting terrorists and criminals.

Similar efforts were attempted to a lesser extent by the previous Faiez Serraj government especially under the more proactive Interior Minister Fathi Bashagha. Aldabaiba has been able to build on those efforts.

However, in reality, Aldabaiba’s law enforcement effort has reached a higher plane thanks to at least two reasons.

First, Aldabaiba is the Prime Minister of a unified Libyan government – the first since 2014. Secondly, this allowed the House of Representatives to finally endorse the Attorney General Sideeg Al-Sour in April this year.

This has enabled Al-Sour to activate all hitherto hibernating files against terrorists and criminals with the full support of both parliament and the government.

These moves can be interpreted as the baby steps of the return of the Libyan state and its institutions.