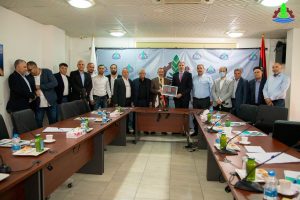 The city’s Chamber of Commerce in its meeting stressed the importance of increasing trade and economic exchange between the two countries, while several attending merchants and businessmen spoke about the most important difficulties facing them in trade between the two countries. Participants requested that the Ambassador help accelerate procedures allowing Egyptian labourers to work in Libya.

For his part, ambassador Sleem said Misrata is the first city he visited after about 10 days of taking up his post. He assured of his efforts to accelerate the return of Egyptian workers to Libya as soon as possible, as well as the easing of entry of Libyan merchants and citizens to Egypt. He also confirmed that the Egyptian embassy is currently returning to work in Tripoli and confirmed that within months it will be present with a full complement of staff.

In his meeting with LISCO, the ambassador discussed various possible ways of increased cooperation, including cooperation with Egyptian iron and steel companies.

During his meeting with the Misrata Maritime Terminal, the ambassador discussed the possibility of launching a cruise line with the port of Alexandria.