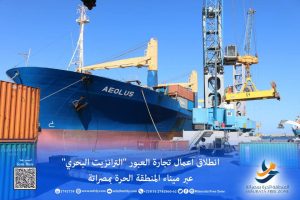 This was achieved through the docking of the ship AEOLUS (belonging to the Volta shipping line) at the MFZ port on Tuesday morning arriving directly from China loaded with 654 containers.

It will be recalled that MFZ had announced on 28 June this year that the first convoy of goods-laden trucks arrived from the Libyan-Tunisian land border, Ras Ajdir – launching transit trade for the Zone. The convoy of trucks crossed escorted by customs guards.

MFZ did not name the goods being transported but revealed that the consignment was for Rouge Supply and Export, adding that it is the first foreign company licensed by MFZ to conduct transit trade.

It will be recalled that while 92 containers may seem a drop in the ocean in international standards, it could act as the first step on Libya’s ladder to launching its transit trade sector.

With oil production down on its Qaddafi era peaks, international crude oil prices well below the highs of US$ 100-plus per barrel, and the likelihood that the golden era of hydrocarbon world consumption over, Libya is very keen to diversify its economy away from hydrocarbons.

Transit trade to the Maghreb, North Africa, the Middle East, Sub-Saharan Africa as well as the Mediterranean is one diversification target for Libya.

Libya has been talking about developing ‘‘transit trade’’ as part of its plans to diversify its revenues away from hydrocarbons for decades. The dream is to become a, or the transit trade ‘‘Gateway to Africa’’.

Recently, there have been discussions by Turkey to develop a transit hub in Misrata for transit trade to Africa as well as efforts by Algeria and Tunisia to increase transit trade with the sub-Saharan continent.

Meanwhile, independently in eastern Libya, Benghazi’s Elmreisa Free Zone (EFZ) had received ‘‘approval in principle’’ in July this year from Libya’s Transport Ministry for the building of a transit trade road to Africa and the establishment of a free zone in the city of Kufra.

The EFZ said the project will be offered up for investment.

The project will involve the establishment of a transit trade road running through Benghazi, Ajdabiya, Al-Wahat, Kufra and on to Chad and Sudan. The aim is to link up with the Red sea through Sudan. The transit trade roads, sea and dry ports are to be funded through the local and foreign private sector, the EFZ reported.

Benghazi-Kufra Transit Trade Route linking Europe to Africa to use Man-Made River unsurfaced road and offer it for investment | (libyaherald.com)

Free, economic and logistics zones, and transit trade to be activated in south | (libyaherald.com)