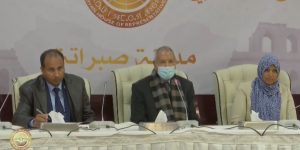 Reportedly, 77 HoR members met in Sabrata yesterday in an attempt to endorse the new Government of National Unity (Photo:).

Seventy-seven members of the House of Representatives (HoR) held a consultative meeting yesterday in preparation for today’s session in Sabrata. At least one hundred are expected by today. This would be well down on the 127 that had met in Ghadames.

On the tricky question of what number makes a quorum, HoR members have been reported by various Libyan media outlets as saying that 91 would make a legal quorate.

The meeting, which included members from the east and south, concluded with several outcomes, the most important of which are:

An agreement was also reached regarding the items on the agenda of the session to be held today, which concludes as follows:

It will be recalled that under the chairmanship of Ageela Saleh, the ‘‘official’’ HoR held a meeting in Tobruk yesterday with about 20 members.