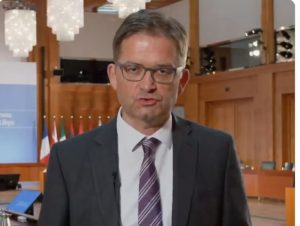 Germany’s ambassador to Libya, Oliver Owcza, said today that there are three reasons behind his country’s and the United Nations’ call for the convening of the Second Berlin Conference on Libya.

Speaking in a video clip recorded at the conference hall where today’s Second Berlin Conference on Libya, he said “We want to assess what was achieved at the first Berlin conference, which is in the first place a permanent ceasefire, a temporary executive authority, the resumption of oil production and the recovery of the economy, which is commendable.”

“We also welcome Libya as a full member of the Berlin Conference, where it is represented by the Prime Minister of the Interim Government of National Unity, Abd Alhamid Aldabaiba, and the Minister of Foreign Affairs, Najla Al-Mangoush.”

“Finally, we look forward to accomplishing the open issues in the road map, especially the national elections that must be prepared at the end of the year, as well as the withdrawal of foreign forces and fighters in order to enhance the implementation of the ceasefire goals.”

Libya will be active and will present its ‘‘Stability Initiative’’ vision at Berlin 2 on 23 June: Foreign Minister Mangoush | (libyaherald.com)

Faltering international steps in Berlin towards peace in Libya | (libyaherald.com)

Serraj and Hafter invited by Germany to 19 January Berlin conference on Libya | (libyaherald.com)