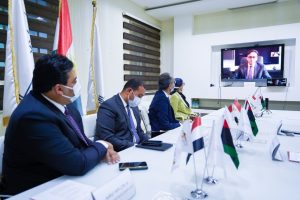 A high-level Egyptian delegation headed by Amr Talaat Egyptian Minister of Communications and Information Technology visited Libya on Tuesday 20th April 2021. The visit was part of the visit to Tripoli by Egyptian prime minister Mustafa Madbouly.

During the visit, a ceremony was held where several agreements were signed between Libya and Egypt in the field of communications, technology, and training.

Prior to the signing of agreements, an initial meeting was held between the Chairman of Libyan Post Telecommunications & Information Technology Company (LPTIC), Faisel Gergab, and Minister Talaat during which both parties reviewed the telecom sectors in their respective countries and discussed ways of cooperation.

The ceremony was attended by Mr. Rajab bin Rajab, director of Libyan Post Telecommunications & Information Technology Company (LPTIC), and Mr. Adel Abu Faris, Chairman of the Board of Directors of the Libyan International Telecom Company (LITC), and Mr. Mohamed Buras Ali, Chairman of the Board of Directors of the Hatif Libya Company. Attending from the Egyptian delegation were, Mr. Muhammad Nasiruddin, Assistant Minister of Communications, Dr. Heba Saleh Ahmed, head of the Institute of Information Technology, and Mr. Adel Hamed Ibrahim, CEO of Telecom Egypt.

A memorandum of understanding was signed between Mr. Adel Abu Faris, Chairman of the International Telecommunication Company, and Mr. Adel Ibrahim, CEO of Telecom Egypt. This agreement aims to improve and develop the international border cable between Egypt and Libya, increasing the performance of international telecommunications services by making use of Egypt Telecom’s submarine cables and transferring this traffic to Libya.

A further memorandum of understanding was signed between Mr. Mohamed Buras Ali, Chairman of the Board of Directors of Hatif Libya, and Mr. Adel Ibrahim Hamed, CEO of the Telecom Egypt Company which aims to exchange experiences and knowledge in the field of operating, maintaining, and developing fiber-optic networks.

A third MoU was signed between Mr. Rajab bin Rajab, Director of LPTIC, and Dr. Heba Saleh Ahmed, head of the Egyptian Information Technology Institute. This agreement includes technical training and human capacity building, aimed at creating fruitful cooperation between the two countries. In the field of human capacity building, the Libyan side seeks to benefit from Egyptian expertise in information technology especially with regards to the newly founded ICT Academy project in Libya.

Commenting on the agreements, LPTIC chairman Gergab stated: “We welcome the strengthening of constructive cooperation between the two countries. The exchange of information, experiences, and the opening of opportunities for development and horizons in the field of digital skills development, will lead to a future full of opportunity and development of the new Libyan economy.”

For his part, Minister Talat stated: “The coming period will witness the provision of more telecommunications services that will serve Libya, Egypt and the African continent in general.”

He stressed that his country is looking forward to more partnerships with the Libyan side in the field of communications to provide advanced technical services in the two countries.

Egypt agrees to supply Libyan Health Ministry with training, personnel and oxygen – to treat Libyans in Egypt on same basis as locals | (libyaherald.com)