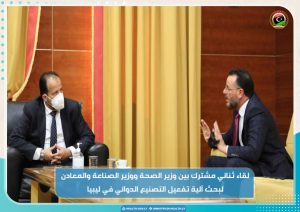 Libya is considering reactivating its formerly notorious Rabta pharma factory complex in an effort to restart its medicines sector.

The revelation came after a meeting Thursday between the country’s Ministers of Health and, Industry and Minerals.

The Ministries said they were considering two phases of restarting the Rabta complex. In the first phase, they were seeking short-term investment through foreign companies, until an integrated vision for long-term investment is developed as a second phase.

The Ministries said they also discussed reactivating the country’s Association for Pharmaceutical Industries and ways to promote it again.

On a topical note, the Ministries also discussed how to take advantage of the country’s oxygen-producing factories, such as the oxygen factory in the Libyan Iron and Steel Company (LISCO), and how to increase its production capacity to meet the demand for oxygen that has increased due to the Coronavirus pandemic.

ESDF to organize workshop on PPP ‘‘Development and Investment Opportunities’’ in over 15 multi-sector stalled projects worth LD 2 billion | (libyaherald.com)

ESDF follows up on planned pharmaceutical production in Libya through its investment in Bosnia’s Bosnalijek | (libyaherald.com)

Libya supports Tunisia through its Covid-19 spike with 12,000 litres of medical oxygen | (libyaherald.com)

Egypt agrees to supply Libyan Health Ministry with training, personnel and oxygen – to treat Libyans in Egypt on same basis as locals | (libyaherald.com)