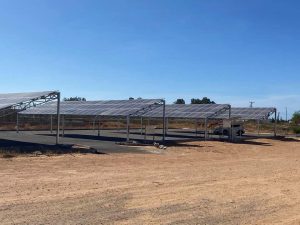 He was celebrating the completion of the project and was reported to have been impressed by the project and confirmed that these type of ideas and projects are what his government should encourage and expand on.

The solar power project will be connected to the national grid producing 62 KW. The solar panels will be designed in such a manner that the area underneath them will be utilized as a car park, Saleh had explained.

This project is linked to the national electrical grid, but it can also be designed independently of the grid to generate the needs of a residential area, an educational institution, a factory, and others with its needs of renewable energy to save fuel consumption and maintain the cleanliness of the environment, Saleh added.

The project site had also been visited by Germany’s Ambassador to Tripoli, Oliver Owcza, as a guest of Alhandasya. The projects is one of the deliverables of the Berlin Libya Economic Conference attended by Alhandasya in 2019, Saleh revealed.

Saleh had revealed that there are other projects in the pipeline awaiting funding and approval.

Over 1,000 solar lights to be installed in Sebha: UNDP | (libyaherald.com)

Libya’s main airports and solar projects could be funded by the Stability Support Fund | (libyaherald.com)

Foundation stone laid for a 100-megawatt solar power project in Kufra – to be implemented by Chinese | (libyaherald.com)

Libyan Council for Oil and Gas changes its name and organizes debate on role of renewable energies in sustainable development | (libyaherald.com)